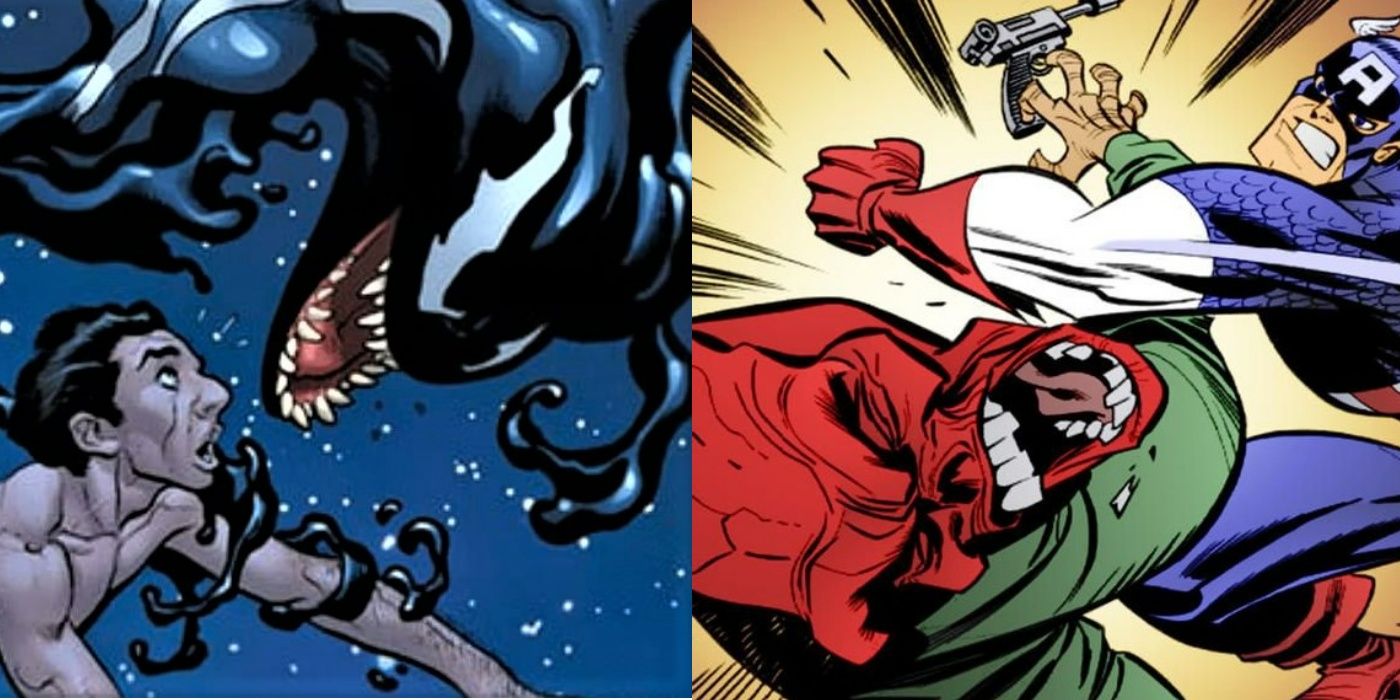 Marvel Comics is home to many famous superheroes and as many, if not more, villains to take on. Marvel villains come in all shapes and sizes, from disgraced ancient scientists who made horrible mistakes to immortal cosmic beings with infinite power. Some are evil masterminds who pose a huge threat to Marvel’s heroes, and some villains are just plain awful at their jobs.

Some Marvel villains are just begging to be roasted with their terrible plans and even worse fashion sense. It’s not just the D-list villains that deserve a good laugh, either, as even some high-profile names seem pretty dumb upon close examination.

There’s an old adage that the only villains audiences will universally root against are Nazis and zombies, and Red Skull has been both. The guy is so easy to hate that an image of him getting punched in the face has been used to sell comic books.

Not content with just being hateful, Red Skull recently decided to become an anti-feminist internet troll. He must be embarrassed to go from being the head of Hydra to sitting at home vlogging and complaining about how he can’t handle progress.

Before becoming a supervillain, Boomerang was a professional pitcher in Major League Baseball. He only switched to a life of crime after he was caught taking bribes and he became a hitman. It was a pretty lousy career move because he could have made a lot more money staying in baseball.

The minimum annual salary for an MLB player is $700,000, and with Boomerang’s quality at throwing, he could easily have made over a million. Instead of just being happy with a very lucrative career, he traded it in for a life of being punched in the face by people in tights. Unlike one of his signature weapons, the career he foolishly gave up is unlikely to come back to him.

8/10 Deadpool was made to death

Deadpool may be an anti-hero now, but he started his career as a villain and is due for a good roast. Since Wade himself would surely recover from any insult thrown at him, this roast will take a page out of his book and break the fourth wall. The problem with Deadpool is not him as a character, but what grew out of him.

Deadpool is essentially Marvel’s Rick Sanchez in that he’s an enjoyable character who’s been slowly ruined by memes and over-enthusiastic fans. Deadpool has been reduced in the eyes of many to the guy who shouts “chimichangas,” and woe betide anyone who interacts with a Deadpool cosplayer who takes their costume too seriously.

When Infinity War came out, a subset of MCU fans argued that Thanos was right to worry about dwindling resources. However, that wasn’t the case with Thanos’ original motivation for assembling the Infinity Stones, which was far more selfish.

Originally, Thanos wanted to win the affections of Mistress Death. As if he wasn’t peacock enough with his big golden glove and huge gems, Thanos decided he’d get even more attention by killing half of all living things. Even after all this, he is not finished with Death; he just ended up looking really desperate.

There’s not much roasting left for Big Wheel, because fans all know he’s the worst. The only time the character is mentioned is as a joke, and at this point even DC’s Kite Man gets more respect than him.

RELATED: 10 Locations Marvel Snap Must Include

The reason Jackson Weele even became a villain is that he felt personally insulted by Rocket Racer nicknaming him “Big Weele”. Apparently his thought process was, “I’m going to show him a Ferris wheel,” so he designed a giant Ferris wheel-like vehicle. It’s lucky for New York that Rocket Racer didn’t give it a more intimidating nickname. If not, he may have become a threat.

5/10 Batroc the jumper has a terrible name

Batroc the Leaper isn’t exactly subtle with his supervillain name. It’s like Steve Rogers went by Captain Shield Thrower. Also, way to reveal your main battle tactic, Batroc. How will the heroes ever find out which angle you attack them from?

Besides his incredibly literal name, Batroc is just a very dumb man. He sports a huge mustache that even Hercule Poirot would call a bit too much, and he sometimes looks like a cross between Captain Falcon and Space Ghost.

The Venom symbiote has jumped between many hosts, so it’s a great accomplishment to be the worst. After getting the symbiote bought by his father, Angelo ignored Eddie Brock’s warning and put it on anyway.

Even the Venom symbiote got fed up with Fortunato and dropped him in the middle of his death, only one issue after bonding with him. It’s the thing that stuck with Mac Gargan for a long time, so the bar isn’t really high.

3/10 Loki is the god of insecurity

Loki, the god of mischief… and insecurity, and jealousy. Although he’s been a bit more nuanced in recent years, Loki has spent thousands of years mulling over Thor’s preferential treatment.

While some sibling rivalry is to be expected, Loki’s feud with Thor has always seemed more one-sided. It’s like how the Yankees and Red Sox are rivals, but the Yankees have won three times the number of World Series. Loki is lucky that Tom Hiddleston is so popular. Otherwise, he’d probably still be a B-list villain getting bodied in a green jumpsuit.

2/10 Doctor Doom wishes he was someone else

Doctor Doom wants to be Reed Richards so badly it’s embarrassing. Embarrassing because he really wants to, and embarrassing that he chose Reed Richards. Of all the smart and successful Marvel heroes, Doom aspires to be the one who caused the Hulk World War.

It would be cruel to roast Doom for his face, but it would probably hit him pretty hard. He still wears a mask, which means he’s clearly sensitive about it. So maybe the next time he acts, Fantastic Four should just mention that he looks like a marshmallow melting on the end of a stick. This could be a good way to distract him.

In theory, Flag Smasher could actually pose a significant threat to Captain America on an ideological level. Flag Smasher denounces nationalism and the idea of ​​nations as a whole, believing instead that the world should be united. However, he is the worst spokesperson ever.

Flag Smasher commits violent acts of terrorism and even kills his own henchmen when frustrated. No one will care how good a cause they support when acting like a violent killer. Nothing will push people further towards nationalism than seeing the selfless Captain America go up against the murderous Flag Smasher. In the end, he ends up being better propaganda for his opposition than Cap himself.

NEXT: 10 Most Evil Organizations In The Comics