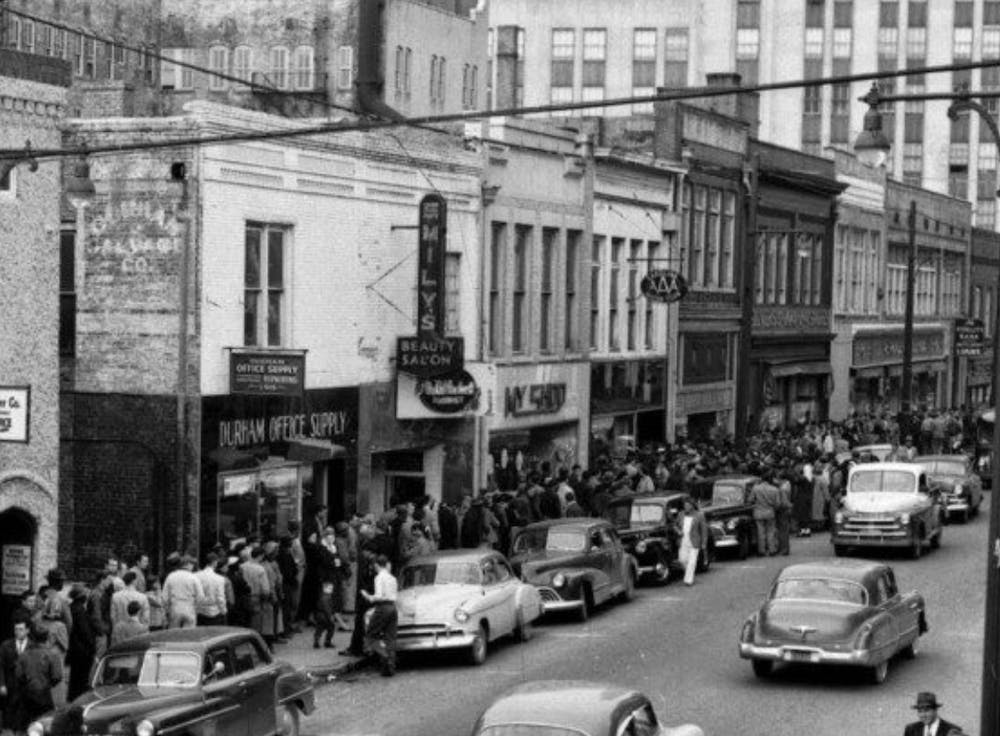 “A special space carved out here in Durham”: the rise, fall and impact of Black Wall Street

It’s 1900 and it’s a typical afternoon on Durham’s Black Wall Street. Black families, couples and individuals get their hair cut at local barbershops, pay down payments on their homes to the North Carolina Mutual Life Insurance Company and shop at the plethora of Black-owned stores that line the street.

During the late 1800s and early 1900s, Durham’s Black Wall Street was home to a vibrant and successful variety of black-owned businesses. A set of four blocks on Parrish Street, Black Wall Street served as a hub for black Americans and was a thriving shopping area with tailors, barbers, pharmacies and more. It put Durham on the map as America’s black middle-class capital, and the town of Bull became nationally renowned for fostering black entrepreneurship.

“Durham was known as the ‘Mecca of the Black South’ because so much attention was paid to Durham’s economy,” said Paul Scott, founder of the Durham-based Black Messiah movement and campaigner who worked to raise awareness to black history in Durham.

Black Wall Street flourished during the Reconstruction era, at a time of racial tensions and systematic discrimination against black Americans.

During the peak of Black Wall Street, these two firms provided loans and financial capital to black people in Durham in a conscious effort to grow black-owned businesses. Travis Rouse, senior vice president and head of sales and loans at M&F Bank, said M&F provided loans to black residents of Durham when they could not receive funding at white-owned institutions.

“[The bank] was really a primary driver of economic growth in the community of Durham,” Rouse said.

Black Wall Street also flourished due to its proximity to the black neighborhood of Hayti, where a number of other black-owned businesses flourished.

Get The Chronicle straight to your inbox

Sign up for our weekly editorially curated newsletter. Cancel anytime.

“Most people, when they talk about Black Wall Street in Durham, they’re just talking about the financial district, the shopping district, but that’s also called the Haitian community. … It was literally a community that helped the business sector thrive and survive,” said Jim Harper, president and professor of history at North Carolina Central University.

As Black Wall Street grew and the number of successful black-owned businesses grew, business leaders and financial institutions in Durham invested in the community, according to an online exhibit from the Samuel DuBois Cook Center on Social Equity. These successful business owners collaborated with wealthy whites within the community, including the Duke family, to build schools, hospitals and churches.

According to Scott, black-owned businesses in Durham have focused on achieving equality and racial justice through economic progress. In other parts of the South, black communities focused on more radical ways to fight for justice, such as black pride movements. In Durham, however, many felt there was a compromise.

“The trade-off was you can have the money, but you have to leave the culture at the door,” Scott said.

This compromise had consequences. The use of economics and money to gain in agency at the sacrifice of cultural pride during the Black Wall Street era in Durham contributed to a general money-driven mindset for young black people of Durham today, according to Scott.

“You’ve got a pop culture that’s created a materialistic outlook…and making money is the end game,” Scott said. “That was really the downside of Black Wall Street. You know, kids today aren’t as lacking in economics as they are in culture.

When desegregation began in the 1960s, many black-owned businesses could not compete with their white counterparts. Urban Renewal, a federal government initiative to redevelop ‘run down’ or ‘slum’ areas, led to the construction of Durham’s 147 freeway in the 1970s. The freeway, which ran directly through the Hayti neighborhood and destroying it, cut off Durham’s central black business district, disrupting over 100 black businesses and displacing hundreds of black families.

“Urban Renewal…was the nail in the coffin,” Scott said.

Although the city government promised to rebuild the community after urban renewal, it never did.

“Durham’s Black Wall Street shows us how unique we are. I think we still have a special space carved out here in Durham that’s different from most places across America, but especially in the South,” Harper said.

How to develop women’s hockey