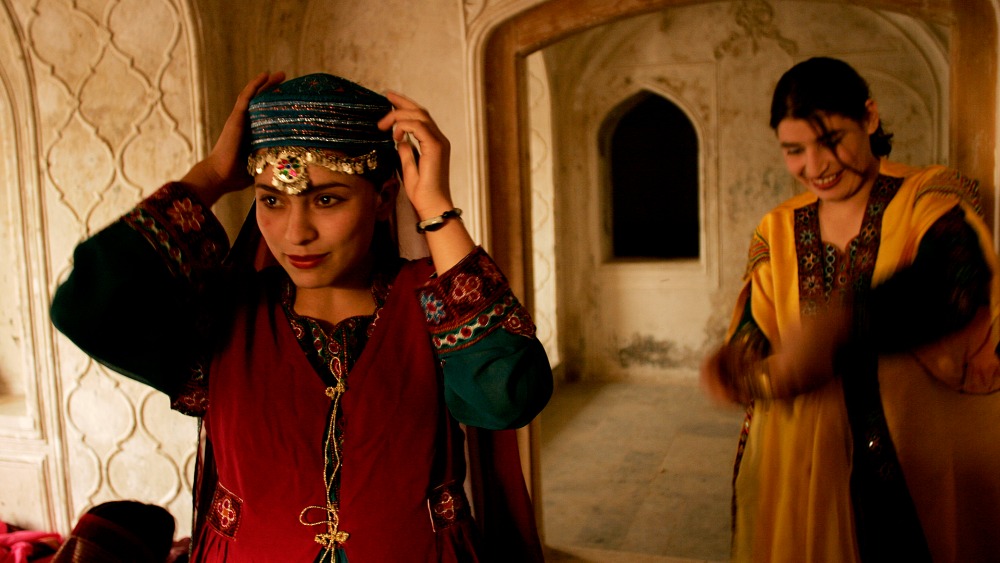 Leena Alam, one of the best-known Afghan actresses, is in the character as she explains that she faces an unthinkable choice.

“Who would know better than I how dangerous it is to be a woman actress with the Taliban?” You can’t give me a drop of fear more than I already have, â€California-based Alam said in a virtual monologue performance for the LA Writers Center.

“Are you offering me death and my children, or life without them?” What would you do? I’ll go home. â€With tears in his eyes, Alam, who has appeared on popular shows such as the feminist dramaâ€œ Shereen, â€flips back and forth on Zoom in front of an airport waiting room with in backdrop of signs for Paris.

The monologue is taken from an interview with her close friend and former co-star Sabera Sadat, another of Afghanistan’s greatest actresses. Earlier this month, in Kabul, Sadat was offered a rare ticket to France, but declined when it turned out that there was no room for his two young boys.

She and hundreds of other female artists and journalists are still awaiting evacuation, or risk a lifetime of fear for their lives “wearing a hijab and lying to strangers who know [their] face â€as figures in the arts and the media.

Although the Taliban have told the world that they are no longer the same brutal terrorists who ruled decades ago, a new list of eight religious guidelines released to local media this week shows that their dehumanizing view of women has failed. exchange.

Women can no longer appear in dramas and soap operas and journalists must wear the hijab, says the first such letter from the Ministry for the Promotion of Virtue and the Prevention of Vice. Under pressure from the Taliban, Afghan TV stations have censored themselves and blurred the cleavage and other parts of the female body since around 2010, but a total ban on the female figure would set the country back decades.

â€œI don’t think they’re going to ban music or TV shows altogether – just women,â€ he said. “They’ll start with moralistic arguments about how we should protect our wives and sisters from appearing onscreen, and once the women slowly move into the background, people will start to think that it is. ‘is normal, and they will be able to deploy more directives. “

Without full control over the internet, the Taliban can’t totally turn off the entertainment tap, because people can still watch whatever they want on their smartphones. They can, however, “completely prevent Afghans from telling their own stories,” Qayumi explains.

This can be a questionable concern. As the Afghan economy implodes, the country’s vibrant media ecosystem, which was once nearly 50 TV channels and 20 newspapers, comes to a halt without outside funding or advertising revenue. Press freedom has already been canceled entirely, with Taliban fighters dictating the editorial strategy of all remaining stations. Production has halted since the August takeover, leaving the cast and crew to face the next winter without a job.

When broadcast journalist Zahra Nabi heard the news of the religious directives, she felt a sense of relief. In his view, they serve to make an impossible situation for the Afghan media more visible on the world stage.

â€œThe Taliban we face on the streets are completely different from the Taliban you see in the media or in Doha,â€ she explains. â€œThey always capture journalists, beat them, arrest them for so many hours. They take the cameras, break them and don’t allow us to report.

â€œWe are already going through very difficult times. At least now, they have announced their intentions, so that the press and the international community can see them, â€Nabi continues.

Founder of the Afghan television channel Baano, entirely made up of women, Nabi is not going to fall without a fight. â€œWe work under the burqa to create our reports and then keep them just because we can’t publish them,â€ she says, describing her recent trips under the garment to investigate the plight of women in violence shelters. domesticated.

Baano was once profitable but can no longer pay wages and is weeks away from closing, she says. The staff of 50 who are still in the country are mostly too afraid to work outside their homes, but they continue to broadcast old material and Islamic programs for fear the Taliban will take over. station and use it for their own purposes. if they close.

â€œAt least we have very fond memories, because our dreams have come true,â€ says Nabi, recalling how men’s attitudes towards his staff had changed since their debut in 2017. â€œBefore, everyone thought that ‘an all-female station was a lot of fun, but we had technicians, cameramen, directors, producers, everything – all without any outside support. “

Television has long had an inordinate influence in Afghanistan, where around 45% of men and 70% of women remain illiterate.

Since 2001, the medium has been a force for progressive ideas since even the mere sight of women on screen, let alone female presenters, was “huge” and helped “to teach people to accept women in the public sphere”, notes Mozhdah Jamalzadah, known as â€œOprah of Afghanistanâ€ for hosting the country’s first talk show, the multi-year hit â€œThe Mozhdah Showâ€.

In 2009, Canada-based Jamalzadah returned to Afghanistan as the country’s first singer before getting her TV hiatus. Her peers thought she would be killed for bringing up feminist topics without wearing a hijab on television, but when death threats failed to knock her down, “the floodgates opened,” she recalls. , and female artists also started singing and getting their own shows, too.

It came at a price. Women in show business have received constant death threats and have often been beaten and even disowned by their families.

Alam, based in California, describes working in Afghanistan during these years as a calling and an act of courage. â€œThey threw bombs and hand grenades on our sets because we were talking about rape, forced marriage and divorce. Still, I continued. It didn’t scare me.

To thwart possible attempts against her life, she would randomly change her filming schedule and take different cars to work. She explains: â€œI was no longer afraid, because I was fed up with them threatening or bombing me. I couldn’t be deleted, because I wanted to move forward with my art and speak freely, because this country needed it, because we were tired of 40 years of war and repression.

Jamalzadah also suffered threats until 2012, when a “horrible rumor” circulated that she had been raped, beheaded and killed with her nose cut off. As the mainstream media began to pick up on the story, the Canadian Embassy stepped in to ask him to leave the country.

“I didn’t want to be seen as an example by these terrorists, because that would prevent a lot of women from continuing in my footsteps,” she said of her possible departure.

For weeks after the Taliban took power, she couldn’t be left alone because she was crying uncontrollably. The new religious guidelines closed the door even more firmly to a future that could have been.

Hearing about the new rules, she felt a burning “anger against humanity” for standing idly by to help Afghan women. â€œI have never felt so helpless in my life. All that work I did trying to win a platform? I realize it was for nothing, â€she says. â€œTo deprive ourselves of all the advances that women have made in the media over the past 20 years is simply unthinkable. “

Alam has compiled a list of 94 other cast and crew members of the “Shereen” TV show, in which she and Sadat starred together, who remain in the country and hope to evacuate. They keep in frequent contact.

â€œAll artists suffer, because an artist without art is fundamentally dead,â€ Alam laments.

â€œArt is a great weapon to change without killing or hurting people, which we use to change society and the minds of extremists. Some of my friends say they will die if they don’t keep working – it will kill them, because they feel suffocated, like someone is strangling their necks.

On Constitution Day, commemoration of Babasaheb and his pioneering legacy

Some Tulsa businesses are eagerly awaiting small businesses on Saturday, grateful for no supply chain issues