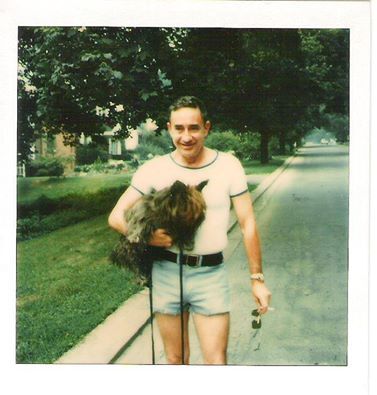 My dad didn’t seem like a likely candidate to be a feminist. The only son of a vice president of one of Pittsburgh’s leading companies, he was loved from birth and had access to every perk his parents could afford: music lessons, summers at Conneaut Lake , a professional-grade camera, horseback riding lessons, a trip to the 1939 New York World’s Fair, tennis lessons, all the books he could read, a ham radio, even the drudgery of lessons ballroom dancing…if it was available and they could afford it, dad had it. He was the prince of the family, darling and secure and clearly destined for better things, and if there was any doubt that he was the prince of the family, take a look at this official portrait from 1935 or 1936. If I haven’t I don’t know better than I think he was a somewhat serious, very slightly spoiled young Rockefeller or perhaps a lesser Vanderbilt.

Dad was a sophomore at Ohio University when his father died in 1943, and I have absolutely no doubt that if my grandfather had lived and my father hadn’t been drafted a few months after his death, this dad would have followed his father in business after the war. In fact, he went overseas, fought the Nazis in La Rochelle and St. Nazaire, then used the GI Bill to study at Teachers College in Columbia. He wanted to teach, then go into administration, and that’s exactly what he did.

Along the way, he met my mother, who taught English at the same high school where Dad taught geometry. Their classrooms were next to each other and dad asked her out after a co-worker told him, “She’s a very pretty girl, and if you don’t ask her out, I will.” Soon they got married, and after five years they had me.

So far, so cliché. Literally millions of families in the 1950s and 1960s have similar histories of war, education, and children, and a surprising number of those families were once torn apart. The female mystic sparked second-wave feminism in the 1960s. I have a collection of letters written to M/s. in the 1970s and early 1980s, and it is clear that a plot men were not very happy when their wives went back to school, got a job and asked them to wash their damn dishes and learn to do the laundry. By birth and upbringing, my father should have been one of them.

Surprise! Maybe it was because he got married relatively late, or because he genuinely admired my mother in addition to loving her. Maybe it’s because his own mother raised him well. Maybe it was something unique for him. But my dad was more than happy to do the laundry, walk the dog, clear the table, and work on home improvement projects alongside mom. He wasn’t much of a cook – the man could and did spoil the cereal with milk – but he tried, and once when Mom was in the hospital he helped me bake her a cake, by carefully following the instructions and beaming proudly as I frosted it once it was cool.

Even better? Dad never once, not once, suggested that I really should be a housewife and mom instead of a paleontologist. He brought me stacks of science fiction books he loved as a teenager, introduced me to comics, and taught me the basics of carpentry and welding. One of my earliest memories is watching star trek on his lap when I was only seven years old, then getting me out of bed to watch the moon landing. “You’ll never forget that,” he said as we watched humans walk on another planet for the very first time, and I never did.

He never used the word “feminist” to raise me or to interact with my mother. He didn’t need it, not when his every word, thought and deed as husband and father made it clear that his wife was his partner, not his slave, and that his daughter was his inheritance in the world. He even read at least one second-wave classic, Caroline Bird’s Born Female: the high cost of keeping women down, and i know for a fact he urged mum to go back to teaching a good four years before she actually did because he knew how much she resented having to write ‘housewife’ on their forms income tax each year.

But perhaps her greatest act of love, her true moment as a feminist, came right after I was born.

My mother had had a difficult pregnancy and a more difficult delivery, and thanks to a piece of placenta that stubbornly refused to pass, she nearly bled to death shortly after I was born. Luckily, Dad got her to the doctor in time to save her life, but it took weeks for her to regain her strength. The first few days of parenthood are quite difficult due to lack of sleep and the damage caused by childbirth, and looking back I am a little impressed with what she has achieved.

And then I think of what dad did, and I realize that she got through the ordeal of her life without suffering a complete physical breakdown.

Because my dad, who could (and probably did) burn water, came home every night after work, hugged me and told mom it was his turn, that he would take care of me until ’til it’s time to put me down for the night. He made my bottle, changed my diaper, took a bath, played and swaddled me safely. The next hour or two was hers to rest, swim, read a good book or take a nap or do whatever she wanted. And no, that didn’t mean he was minding me while she was cooking dinner or throwing a load of laundry in the laundry. That hour or two was hers, only his. Dinner, laundry, tidying up the house, all of that could wait. She had nearly died giving him her only child, and the least he could do was shoulder some of the burden.

He even gave up his only chance to do what every science fiction fan dreamed of at the time: go to Worldcon. Because it was the first (and so far, only) time Worldcon would be in Pittsburgh, downtown at the William Penn Hotel, and all the writers he loved would be there. Isaac Asimov was the toastmaster, James Blish was the guest of honor, and no less than Hugo Gernsback, the Luxembourg publisher who had fundamentally invented the genre, would receive a special award. Dad had bought his season ticket a long time ago and had been looking forward to it for months.

No one would have blamed him if he had asked my aunt to come stay with mum this weekend, let alone mum herself. She knew what this Worldcon meant to him, and they both knew it was probably the only chance he would ever have. It was literally a dream come true for him, a lifelong fan – and he gave it up without a whisper because his wife and daughter came first.

If not the act of a feminist, especially in the days when married women were fired for getting pregnant (like mom), functionalist educators were urging liberal arts colleges to stop teaching chemistry and teaching women “the simple sophistication of fresh artichokes with milk”, and a dozen qualified women were kicked out of the Mercury program while men with lower test scores went into orbit, I don’t know what what it is.

One thing I know:

My father would have stormed the barricades of the Supreme Court if he were still alive.

If you’re not already following Readers and Book Lovers, head over to our homepage (link), find the top button in the left margin and click it to FOLLOW THE GROUP. Thank you and welcome to the most followed group on Daily Kos. Now you will get all of our R&BLers diaries in your feed.