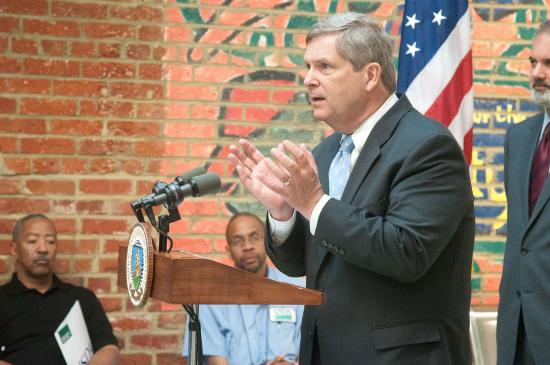 Equity Commission to review USDA programs and policies if biased

Assistant Secretary of Agriculture Jewel Bronaugh will co-chair a congressional-approved equity committee to address racial discrimination within the USDA and its programs, the Agriculture Department said. The USDA has been called “the last plantation” because of racial bias in its operations; it paid $ 2.2 billion to black farmers and their descendants in the so-called Pigford settlements of 1999 and 2010.

“The Equity Commission is an important step in dismantling the barriers historically underserved communities have faced in accessing USDA programs and services, particularly with respect to access and inclusion in USDA agricultural programs and services, â€Agriculture Secretary Tom Vilsack said in a statement. In March, Vilsack appointed Dewayne Goldmon, executive director of the National Black Growers Council, as the USDA’s first senior advisor on racial equity.

In March, as part of the $ 1.9 trillion stimulus package, lawmakers agreed to “one or more equity commissions that will deal with racial equity issues within the Department of Agriculture and its programs â€and about $ 5 million for its work. The commission will have 15 members, along with 15 other members on a subcommittee devoted to issues of concern to agriculture, the USDA said.

The commission was included in section 1006 of the package which provided $ 1.01 billion to improve access to land, resolve inheritance issues and provide legal aid to socially disadvantaged farmers. It followed Section 1005, which allocated $ 4 billion to write off debts owed by minority farmers on loans made directly by the USDA or by banks with loan guarantees from the USDA. The debt relief plan has stalled amid lawsuits by white farmers who say it is reverse discrimination.

Senate Agriculture Committee member Cory Booker said earlier this month he was trying to include language in the “build back better” bill to “grant debt relief immediately” rather than d ‘wait for a court decision.

The Fairness Commission is expected to issue an interim report and provide “concrete recommendations” within 12 months of its implementation. A final report would be completed within two years, the USDA said. Vilsack and Bronaugh, the first black to serve as deputy secretary, will choose a co-chair to serve alongside Bronaugh as the head of the commission.

“Today’s announcement of an equity commission to address inequalities in any program, policy, system, structure or practice at USDA is a step in the right direction,” House Chairman said Agriculture, David Scott. “For too long, discriminatory practices have been allowed at all levels of the department.”

At a glance: University Fair, Women’s Business Network and more in Hampton