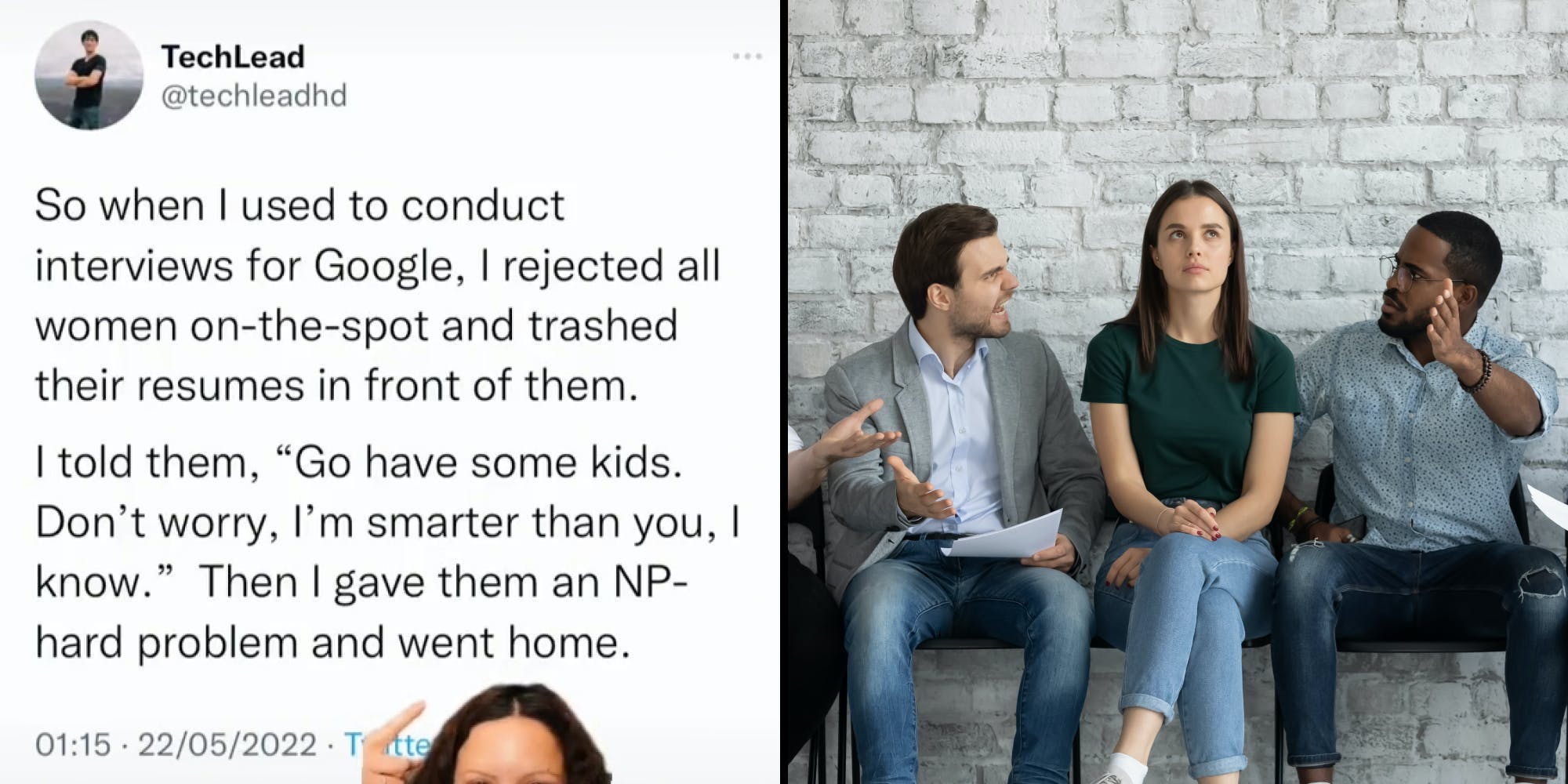 The topic of gender bias in job interviews is an often-discussed and reported topic. From sexual harassment at work to outright sexism, women at work can face notable biases.

There are cases where the interviewers will ask the candidates outright sexist and potentially discriminatory issues, such as whether or not a woman has children. In America, it is illegal for a company not to hire someone based on whether or not they have children, are pregnant, or are planning to start a family.

A TikTok from user @and_says_ has gone viral for featuring such an example. In it, she highlights a now-deleted tweet from @techleadhd that reads: “So when I was interviewing for Google, I rejected all the women there and trashed their CVs in front of them .”

The tweet continued, “I told them, ‘Go have kids. Don’t worry, I’m smarter than you, I know that. Then I gave them an NP-hard problem and went home.

The caption of the video reads: “It was just a joke.” In it, the TikToker lip syncs with someone saying, “Everyday. Not all day, every day. But, every day.

While @TechLeadHD claims the tweet was a joke, this attitude has real-world implications. According to a 2020 article by Western Governors University, the tech industry is male-dominated, with men making up 75% of the industry. In November 2021, PCMag also wrote that gender bias in tech “stubbornly persists[ing]” although there are more women working in tech than ever before.

Forbes also reported that there was little progress on the percentage of female employees at Google as of 2020. In 2017, discrimination issues relating to the gender pay gap at Google were raised, women losing thousands of dollars a year. in their salaries compared to their male counterparts.

The same year, Google fired a software engineer who released a company-wide memo asking why so much effort has gone into diverse hiring and said clear biological differences were the reason there weren’t more women applying and thrived in tech jobs.

Viewers of @and_says_ post were shocked by the cheeky nature of the tweet and denied that it was just “a joke”. Others share that they have encountered similar banter and “humor” from other men who work in the tech industry.

One commenter said: “I have a feeling this won’t end well for him. It shouldn’t. There is always some truth in “humor” like that.

Another shared: “Lol once a Google interviewer told me that I ask too many questions and that’s why I don’t belong [at] Google.”

A third shared: ‘Our former head recruiter saw the candidates CV and literally said ‘Oh great, we don’t have to pay this one as much’ as ​​a ‘joke’.

The Daily Dot reached out to @and_says_ on TikTok and @techleadhd on Instagram to comment on this story.

Jack Alban is a freelance reporter for the Daily Dot, covering human interest/social media trends and real people’s reactions to them. He always seeks to incorporate evidence-based studies, current events, and relevant facts into these stories to create your not-so-average viral post.