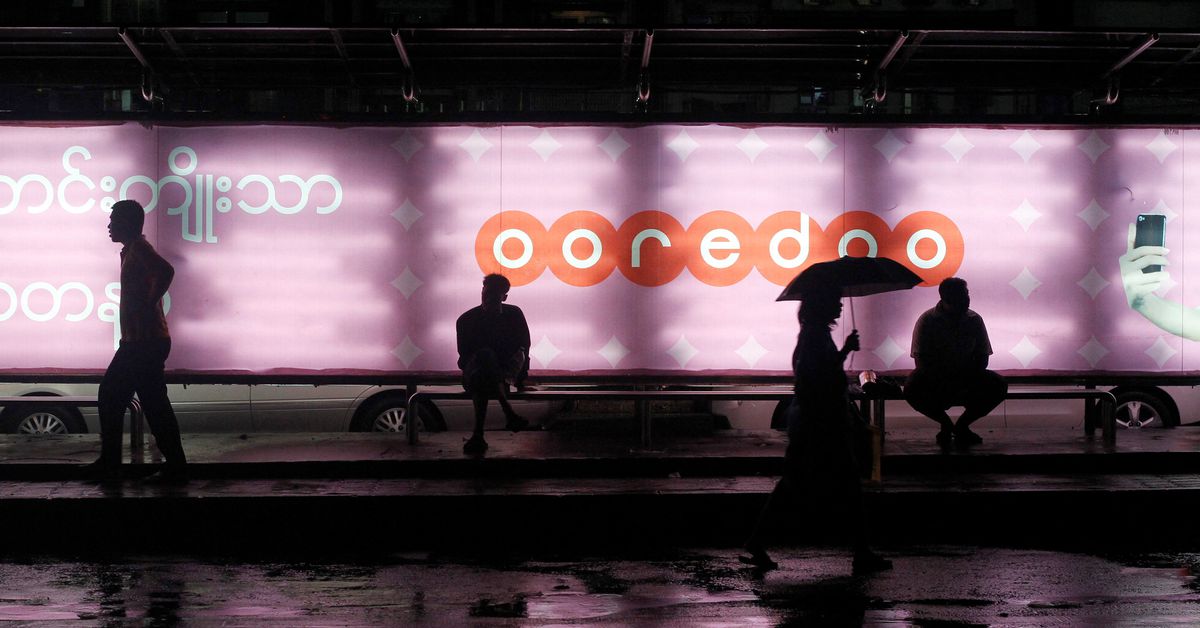 People sit at a bus station with an Ooredoo advertisement while waiting for a bus in Yangon, August 1, 2014. REUTERS/Soe Zeya Tun

The people said that Doha-based Ooredoo had notified Myanmar’s Posts and Telecommunications Department (PTD), the country’s regulatory body, of its intention to sell a unit which was Myanmar’s third-largest operator with nearly 15 million users in 2020, before the industry was disrupted by February 2021 military coup.

People said talks with the three suitors have yet to reach their final stages.

Ooredoo did not immediately respond to email requests for comment.

Calls to a Burmese junta spokesperson, the PTD, Skynet and Young Investment Group went unanswered. Campana Group said it had no immediate comment.

The sources, who declined to be named due to confidentiality constraints, did not put value on the size of the potential sale.

Reuters could not immediately determine how much Ooredoo has invested in Myanmar. Ooredoo had 9 million customers in 2022, according to its revenue, up from 15 million in 2020, for which it recorded revenue of around $330 million.

Myanmar’s telecommunications sector has faced increased pressure since the military took over in 2021, after being one of Asia’s fastest growing markets. Mobile data remains shut down in part of the country, following nationwide internet restrictions throughout 2021.

Ooredoo is the latest majority foreign-owned telecommunications company in Myanmar after Norway’s Telenor (TEL.OL) pulled out of the country in March this year in a struggling start.

Other telecommunications service providers in the country are MPT, a large state-backed operator, and Mytel, a venture between Myanmar’s military and Viettel, owned by Vietnam’s Ministry of Defense.

Telenor told Reuters in 2021 it had to sell its operations to avoid European Union sanctions after “continued pressure” from the junta to activate intercept surveillance technology. Read more

Reuters reported in July 2021 that a confidential PTD order had been issued barring top foreign telecommunications executives from leaving the country without permission. The travel ban was followed by a second order ordering telecommunications companies to fully activate interception.