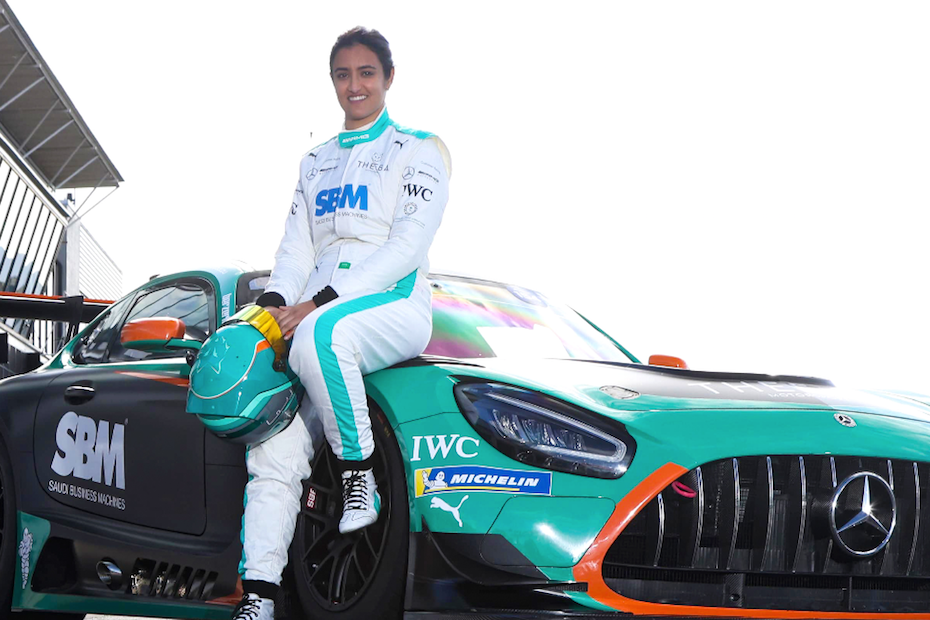 What inspired you to get into professional racing?

Aspiring to compete in the 24 Hours of Le Mans made me realize that professional racing was a possibility, rather than a pipe dream. It was my gateway into motor racing, but what inspired me to do it professionally was the support and support I received from everyone at home and around me.

Tell us about your background and its impact on Saudi and Arab women?

When I entered motorsport, I was pursuing my passion and therefore, I focused on my personal journey. At first, I didn’t really look at the big picture or think about the influence my career might have on others. Realizing how much of an impact I have has been one of the biggest rewards of my career so far. By sharing my story, I give people the opportunity to see bigger and aspire to things they didn’t think were possible before. Motorsport, especially circuit racing, is quite new in Saudi Arabia, and I hope what I’m doing inspires men and women to do more, even if it’s outside of racing.

Tell us how your family influenced you?

My family has inspired and supported me throughout my career, but my decision to become a racing driver was truly mine. At the time, motorsport was not popular in Saudi Arabia. I had to get out into the world, understand the sport and learn the ins and outs of it. The whole experience was very self contained.

What have you learned from your experiences as a racing driver?

I arrived quite late in motorsport, and when you embark on something new, especially in the world of sport, you always test yourself. You have to be mentally sharp and physically strong, because you’re asking your body and your mind to do things you never thought possible before. I learned so much about handling pressure in racing situations; what you learn on the track is something you can reflect in life. I learned to manage my time, make the right decisions, stay focused and set realistic goals. In fact, after every race, I find myself learning something new.

Tell us about Theeba Motorsport?

Entering the world of motorsport was a learning experience. I didn’t know where to start and had lots of questions about how I could get involved. Now, because of the position I’m in, people often ask me how they can participate. In the past, I didn’t feel like I had the right answers. It inspired me to create Theeba Motorsport in May. I created the team to give people in Saudi Arabia the opportunity to learn more about this sport. After all the support I received, I wanted to give back. I want to help elevate talent in the region, and Theeba Motorsport will provide them with a platform to learn, grow and eventually become part of an established racing team. I also see the team as a bridge connecting Saudi Arabia to the rest of the world.

What are some of your most memorable moments?

When I started my career I was the first female racing driver to come from Saudi Arabia and I think one of the first milestones was racing the streets of our capital Riyadh in a championship called the Jaguar I-PACE Trophy. It was my first home race and it was a very special moment for me. I then spent a lot of time honing my single-seater racing skills. Earlier this year, I participated in the 24 Hours of Dubai, which was my first endurance race. I finished on the podium, and that ticked all the boxes for me; I felt like all my hard work was paying off. The creation of Theeba Motorsport and its first victory were also proud moments that I will never forget.

You recently had to withdraw from the first round of the International GT Open in Hungary. How did this impact your ranking?

After having a difficult race at Spa in Belgium, I think we all had very high hopes for Hungary, but unfortunately an accident in the first race forced us to retire for the rest of the weekend. Up until then we were performing very well so it was frustrating to end our weekend this way, but I think the challenges we faced made us stronger as a team. In our class, we are currently second in the championship, 20 points behind the leaders, but there are still six races to go and 60 points available. We are very motivated for the second half of the season and we will give everything.

What is your big goal?

My main aspiration is to compete in the 24 Hours of Le Mans. Le Mans was the race that showed me that it was not too late to pursue a career in motorsport. I saw riders older than me compete in this world-class race and finish on the podium and it made me realize that if they can do it, so can I.

What’s next for you?

I just finished the 24 Hours of Spa, which is probably the biggest race of my career so far. We took victory in the Bronze Cup category during the race. It was a race I was really looking forward to, as it was a chance to compete against some of the best riders in the world. Looking ahead, I have very high hopes for the next races at the Red Bull Ring and if we are able to deliver good results over the last three weekends, I think we still have the potential to win the title. We are currently evaluating several winter series that we can compete in the Middle East.

If it wasn’t racing, what would you be doing?

Before I started racing, I mainly worked in finance and investments. I always have a keen interest in business and investing.

Any advice for women who want to get into the sport?

I learned a lot from my experiences in motorsport. I learned that I can be my worst critic, but at the same time, my biggest cheerleader. Self-confidence is sometimes easier said than done, but I felt it was important to trust in my abilities when I discovered the sport. Entering a new environment, especially a predominantly male-dominated space, can be daunting at first, but it’s important that you do your best and remember that you’re here to learn. It is important to be true to yourself and believe in your abilities, but also to be patient.