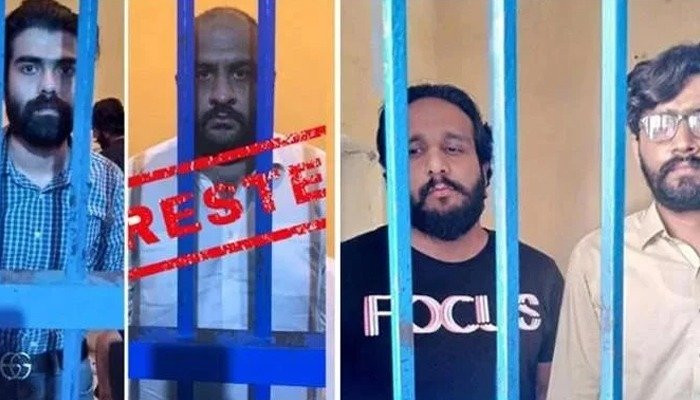 ISLAMABAD: The female victim of the Islamabad harassment case told the court on Wednesday that she was under pressure to pursue the case against her will, Geo News reported.

District and Additional Sessions Judge Atta Rabbani conducted the hearing of the case during which the couple appeared in court. A day ago, Rabbani had issued a non-releasable arrest warrant for the couple for failing to appear in court for a scheduled hearing.

During Wednesday’s hearing, police also brought Usman Mirza, the main suspect in the harassment case, and others to court.

The female victim complained in court that she was being ‘pressured to pursue the case’ and pleaded with the court to grant her a ‘permanent exemption from the case’.

“I have already recorded a statement that I don’t know any of the defendants arrested in the case, so why am I in a rush to pursue the case?” she said.

At the request of the defendant’s lawyer Umar Bilal, the court allowed the release of a certain part of the video after asking journalists and others to leave the courtroom.

During cross-examination, Bilal’s lawyers asked the female victim if her client had offered her 100,000 rupees for retracting her statement.

In response, she denied the allegations against her, saying she “didn’t take any money to get out of the case.”

The victim also told the court that she had never met the Inspector General of Islamabad or any police officer, adding that she got married after the video went viral.

On occasion, the suspect’s lawyer pleaded with the court to put the couple’s names on the Exit Control List (ECL), which prohibits people from leaving the country.

Prosecutor Rana Hasan Abbas also cross-examined the male victim of the case and questioned him about his work.

The male victim said that when the video went viral: “I was associated with the real estate industry, but now I’m out of a job.”

Following the conclusion of the cross-examination of the plaintiffs by the defense attorney, the hearing was adjourned until January 25.

At the next hearing, lawyers for the defendants will cross-examine an investigating officer on the case, as reported Dawn.

Last year, in July, a video surfaced on social media in which the main defendant in the case, Usman Mirza, could be seen violently beating and harassing a young couple in a room full of other men.

Hours after the video went viral, Islamabad police arrested Mirza and filed a first information report (FIR) in the case.

The female victim reconsiders her statement

The female victim of the Islamabad domestic harassment case had withdrawn her statement and submitted an affidavit to deny having read the case further.

Earlier, the statement of the female victim of the case was recorded before the magistrate in which she said that Usman Mirza and the other defendant had “threatened to gang-rape her if she did not have sex with his friend while they were filming him”. .”

The female victim had submitted a stamped paper to the court and said that “the police themselves created this case, I did not recognize any defendants or sign any papers”.

She further claimed that the police took her signature and thumbprints on blank papers on several occasions.

State to pursue the case

After the female victim withdrew from her statement, PTI Parliamentary Secretary Maleeka Bokhari tweeted to announce the federal government’s decision to pursue the couple’s harassment case on behalf of the state.

She said the decision was made in light of the female victim’s refusal to acknowledge the suspects despite the availability of “irrefutable” video and forensic evidence.

“The State will pursue the prosecution in the Usman Mirza case regardless of recent developments regarding the victim’s testimony. Irrefutable video and recorded forensic evidence – anyone who harasses and strips a woman must face the full force of the law,” she wrote.