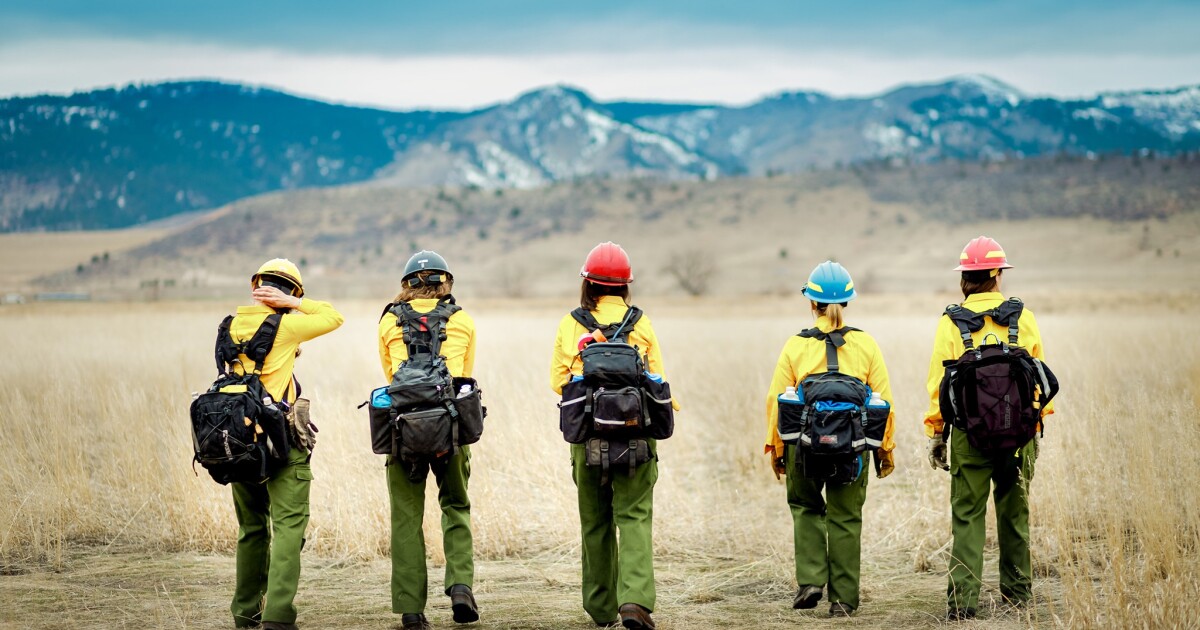 FORT COLLINS, Colo. – If you watch firefighters walk towards a wildfire, you’ll likely see heroism, bravery and courage. What you might not notice are the women rolling up their overly long trouser legs and pushing up their belts while working next to the men.

Their uniforms, which are technically designed for women but are actually just slightly modified men’s sizes, sometimes rub them in awkward places, causing them to bleed and chafe. They struggle to keep their pants and sleeves tucked in, and the loose fabric regularly catches on the brush. For smaller women, the crotch of the pants hangs near their knees. While struggling to simply keep their clothes in place, they work in harsh terrain and around volatile flames for days, weeks, or months at a time, typically wearing the same shirt and pants most days.

This is the reality for more than 10,000 women fighting wildfires in the United States.

“And so when you do physical work like that, you have to be comfortable. You need to wear something that fits so you can move easily. So it’s a huge, huge problem,” Korena Hallam said.

Hallam and Summer Hurd are set to change that as co-founders of Green Buffalow, which is based in Fort Collins and named after an 1804 diary entry by Lewis and Clark in which a boy survived a fire after hiding under a green buffalo skin.

Female wildland firefighters are stuck with uniforms made for men. Now a Fort Collins duo are shaking up the industry

Armed with experiences in apparel, design and business development, the duo first came together in 2015 with the aim of creating a meaningful project. With a tip from Hallam’s husband, who has been a wildland firefighter for 22 years, they started looking at firefighter uniforms as a whole to see if they could improve fit while keeping comfort and practicality.

“But we quickly discovered that the women were wearing uniforms made for men,” Hallam said. “And so, we shifted gears because we started all of this. And we couldn’t do both, unfortunately, but the need was much greater for women in the industry.

Thus, the years of research began.

“We are in our sixth year of Green Buffalow,” Hurd said. “But the early years we had to study the National Fire Protection Association (NFPA) regulations, and all the fabrics, threads, buttons and zippers – everything that needs to be dialed into the garment. “

They held focus groups and try-on wear with female wildfire firefighters, and listened to industry experts to learn about gaps in the wildfire uniform sizing space. It was there that they learned the depth of the problem – it was not uncommon for women to seek medical treatment for severe irritations – and gently corrected those who thought Green Buffalow simply wanted to improve the style of the uniforms by “dazzling” the current outfit, Hallam said.

NFPA 1977, which outlines standard requirements for protective equipment in wildland and urban firefighting, has a strict sizing guideline with specific measurements for clothing. Hallam said these sizes need to be updated, especially following recent advances and improvements in technology and fabrics. The last updates were in the late 1980s and early 1990s, she said.

Hallam and Hurd decided they could do better.

Using research and focus groups from the past few years, they designed prototypes together in Fort Collins. They hoped to continue manufacturing in Colorado, but could not find a company available with the necessary skills. When they expanded their search nationwide, they settled on a manufacturer in California.

Hallam and Hurd pitched their idea to the male-dominated NFPA 1977 committee in 2018, marking the first time a female-owned (and minority-owned) company had actively worked with them on sizing issues. Women introduced Green Buffalow as comfortable yet fully functional uniforms for women, with plans to expand their product line to include men in 2022, since male firefighters had also said Green Buffalow uniforms far exceeded this. which was, and still is, currently available.

“So we brought the committee a solution, because apparently that was an issue they were discussing at every meeting,” Hallam said. “And really, our solution was breaking out of that box and really looking at what could be implemented to help not only women, but men, have better designs and do their jobs better.”

The committee launched question after question after their presentation. Hurd and Hallam responded with detailed responses and scrupulous explanations.

About two years later, in August 2020, Green Buffalow launched its first products: the technical and athletic Aspen shirt and the Noble pants.

The complete women’s uniform includes a bright yellow shirt with 16 sizes, ranging from small XS to 2XL, and dark green pants from XS to XL. They’re packed with technical features, from inverted folds for unlimited arm movement to extra articulation around the knee for kneeling. The uniforms also feature improved basics, like better quality pockets and a more comfortable waistband.

The specialty threads are all fire resistant (women cannot have their current uniforms customized, as the tailors will use cotton thread, which will cause a host of safety issues).

“The days of cutting off the bottom six inches of a small men’s shirt and rolling up the sleeves a million times are over! one woman wrote in a review of the Aspen shirt.

For two years, Green Buffalow sold nearly all of its inventory to federal, state, and local agencies, as well as individuals, through its website www.GreenBuffalow.com.

“Overall, I would say our adjustment – ​​we feel like we’ve really nailed it,” Hallam said. “And the feedback, it’s just phenomenal: ‘Thank you so much for giving us a uniform that’s really made for us. It makes us feel so much better. And we don’t have to wear clothes made for men, and we don’t feel like clowns. And I can present myself and look and feel professional, but I can also do my job effectively.

Now Hallam and Hurd are in their third year of producing the uniforms. But demand far outstrips supply. It’s hard to keep uniforms in stock.

“We’re still small enough that we haven’t been approached by an investor,” Hallam said. “You know, we’re not bringing in an investor. And so the bootstrap – it’s no longer cutting for what we can afford and making a few hundred pieces at a time. And like Summer said, we’re selling out so fast. We need to have more inventory.

To help increase their production and stock, they chose the IFundWomen funding marketplace, which supports women-owned businesses by providing an online fundraising option and connecting entrepreneurs to investors.

With three days remaining in their current campaign, they have raised $14,525 of their $50,000 goal thanks to 27 backers. Hallam said they will get every dollar promised so far, they reach $50,000 which is a benefit of the IFundWomen platform. The total amount raised will determine the number of uniforms they can make and sell.

As this progresses, Hallam and Hurd work on another front: getting Green Buffalow’s uniforms officially certified.

“Our hardware is not certified because we’ve gone off the beaten track,” Hallam said. “But we have worked with them to find out where they are heading. A lot of people just want something that fits so they can do their job.

The women are helping one of the certifying parties write an addendum to the NFPA 1977 Standard for Protective Clothing and Equipment for Wildland Firefighting and Urban Interface Firefighting, and “once that fact, we could easily get our stuff certified,” Hallam said. . She added that the US Forest Service said wildland firefighters have the freedom to buy what they need if the standard uniforms don’t fit. Once certified, Green Buffalow would fall into this category.

The company even caught the attention of Canada’s top forest fire officials, who ordered a large quantity of Green Buffalow for its own trials.

All the while, in the background, the co-founders are working to advance the uniforms that many female firefighters are already raving about. Green Buffalow has partnered with North Carolina State University to use 3D body scanning to analyze their designs for any shortfalls.

“Every day is an uphill battle,” Hallam said.

Some days she looks back on the work she’s done with Hurd — in addition to their day jobs and side jobs — and feels like crying something between pride and gratitude. And probably a little exhaustion. It’s been a long process amid years of research, navigating committee meetings, and listening to praise from women in the field, and there’s still a lot of work to be done.

But seven years later, they’re still fueled by the same fire that started Green Buffalow in the first place.

“We constantly send each other emails and text messages from end users wearing our garments,” Hurd said. “And we will cry because they bleed from their uniforms. And now they have something that suits them, they feel good and they can do their job better. It’s just amazing to hear.