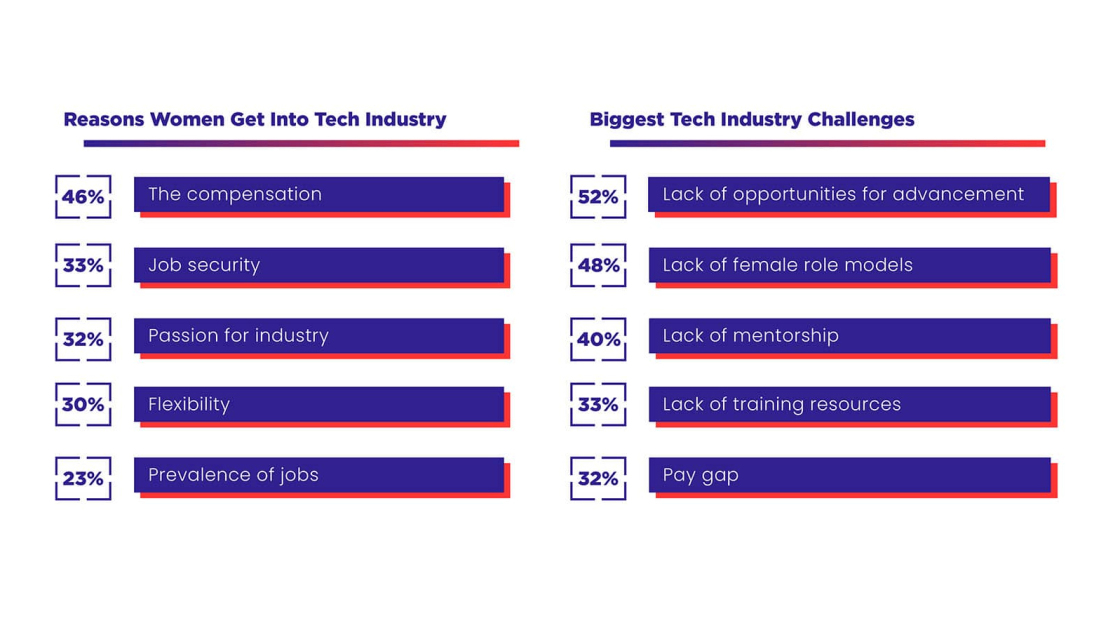 Technology is considered a progressive field. But when it comes to gender issues in the workplace, technology is as regressive as any other, as evidenced by headlines on companies like Blizzard Entertainment, Apple, and countless others.

And gender prejudices do not disappear. A new New View Strategies study found that one in three women surveyed reported gender bias at work, and this takes many forms.

Women have been and still are not represented in technology; some reasons stem from their early school years. When those who persist in a tech career finally get a job, they may not stay long, due to the corporate culture. Almost 40% of women who responded to the New Views Strategies survey plan to quit their jobs in the tech industry within the next two years. Their reported challenges include a lack of advancement opportunities (52%), female role models (48%), mentoring (40%), and training resources (33%). Thirty-two percent also cited the pay gap.

Almost half (46%) of women surveyed said salary was the reason they got into tech, but the pay gap is a huge practical problem that companies very often don’t face. . The division of wages between employees can be seen as a verboten, but the overall wage gap is a poorly kept secret, with 43% of women surveyed saying they believe there is one in their workplace. Twenty-four percent discussed it with their colleagues and 26% saw the salaries of colleagues.

The pandemic has exacerbated this problem. COVID-19 has impacted almost every aspect of work culture, but has been especially hard on working women. The burden of childcare has pushed nearly 2 million women out of the workforce. Of the New View Strategies surveyed, 52% said their workload has increased since the start of the pandemic, and 27% are less optimistic about their careers.

A small advantage of working from home seems to be that it eliminates sexual harassment, but it doesn’t. Ten percent of those surveyed said they had been harassed because of Slack, email, and Zoom. Almost half of the women surveyed (48%) were not sure of the existence of remote harassment policies in their company.

In a time of so much change (for better or for worse), tech companies can do a lot more to change the experiences of women. Only 28% of those surveyed felt that their organization gave priority to gender equality, whether in recruitment and / or in company culture.

Get our best stories!

Sign up for What’s up now to get our best stories delivered to your inbox every morning.

This newsletter may contain advertising, offers or affiliate links. Subscribing to a newsletter indicates your consent to our Terms of use and Privacy Policy. You can unsubscribe from newsletters at any time.