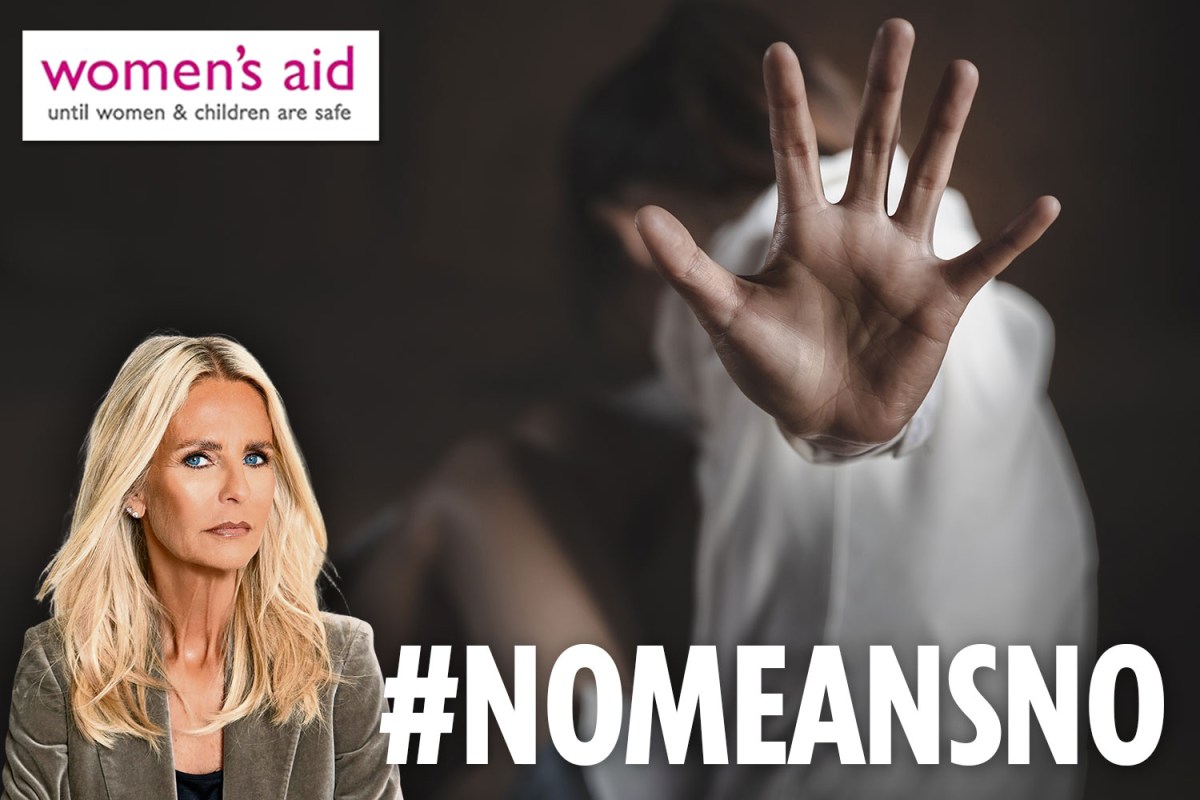 WITH harrowing sound and images circulating on social media, a top footballer has been accused of rape and assault by a young woman.

Regardless of the truth of the allegations, the case highlighted issues of sexual consent.

Starting today, The Sun is joining forces with Women’s Aid to launch the #NoMeansNo campaign, calling for greater awareness of consent.

We’ll explore what consent is, how to tell your children about it – and tell the devastating stories of survivors of domestic violence.

Women’s Aid chief executive Farah Nazeer says: “No means no, but it goes way beyond that.

“We must strive for fully informed, mutual and enthusiastic consent.

“Sex with your partner should give you a sense of security, happiness and health.”

Here, Sun columnist Ulrika Jonsson shares her personal experience and explains why no really has to mean no.

It’s hard not to see these images of bruises and blood posted by a young woman who has accused Manchester United striker Mason Greenwood of physical and sexual assault.

It is considerably more difficult to not hear the voice recording.

Greenwood, 20, was arrested for these allegations, but regardless of the outcome, heartbreaking stories like these still make me think about the issue of consent.

And yet, it’s as if the debate around these issues could have taken place 30 or 50 years ago, when much of society too easily chose to ignore a woman’s right to say no.

Of course, we don’t know what happened in that case, but amid the comments accompanying the social media posts – which were quickly deleted by the woman – there were remarks asking if the allegations could be considered rape if they were in the context of a relationship.

I was amazed that this was still questioned.

Although this story is not about me, it touched a very personal nerve.

When I was 19, I was sexually assaulted in my hotel room, in the middle of the day, by someone who chose to ignore my repeated pleas: “No! No! No!”

Throughout the time the assault took place, I was silenced by my own fear and tormented by thoughts that it was probably my fault for inviting the man into my space.

There’s no way in the world I went to the police after my experience either.

When I was 19, I was sexually assaulted in my hotel room, in the middle of the day, by someone who chose to ignore my repeated pleas: “No! No! No!’

Consent was just not something anyone had ever discussed with me, whether at school or at home.

Before the assault – and for many years to follow – I was naïve enough to think that rape was something you might be unlucky enough to be subjected to by a stranger in a dark alley in the middle of the night.

It had never occurred to me that this would happen in the heat of a hotel room, in broad daylight.

And that was probably the thought of most women.

But the public conversation and the mood have changed.

For decades, women’s voices have been growing steadily louder.

And while we try to explain to women that they must give clear consent, we have been less successful in imploring men to ask.

I am a mother of four children including two boys.

My eldest is a 27 year old adult and I don’t recall ever discussing with him asking for consent if he was in an intimate setting with a girl.

I certainly should have, but while there are no absolute guarantees, he was always a decent, respectable lad with a good moral compass.

Perhaps because it was not part of the public discourse at the time, I did not mention it.

But moreover, it was his strong sense of right and wrong that meant I never felt the need for it.

Throughout the time the assault took place, I was silenced by my own fear and tormented by thoughts that it was probably my fault for inviting the man into my space.

Fast forward to my youngest boy, who is 13 and currently going through the trauma of puberty.

He finds himself living in a house dominated by two strong and feminist women: his mother and his older sister.

Discussions of consent and how to treat women feature in many conversations around the dinner table.

We try to cover all the bases – women’s fears, women’s experiences historically and currently, and her own personal responsibility in relation to women and girls.

He listens and understands.

It’s a fact of my life that I’ve always found it more painful to tell my daughters how to avoid being hurt by men than to tell my boys not to hurt women.

They can both feel like they’re having conversations that shouldn’t be happening.

But this weekend’s discussion proves that it is needed more than ever.

There has been so much speculation, criticism and observation that the woman in question uploaded images and recordings to social media rather than going to the police with her testimony.

For most people, this social media lawsuit is unfathomable and inexcusable.

Who knows what the truth is at this point?

But one truth is that many women don’t trust the police or the criminal justice system – and who can blame them?

There’s no way in the world I went to the police after my experience either.

Fewer than one in 60 rape cases result in a charge.

Add to that the very idea that it could be someone in a committed relationship and you can already distinguish the blurry lines of consent and obligation.

Not to mention, of course, that for so many women, the prospect of having their sexual past and potentially “provocative” present of posing and pouting online analyzed by lawyers is just too big an exercise in endurance to that they might even consider it.

On this occasion, Manchester United suspended the player fairly quickly and his sponsor, Nike, said he was “deeply concerned”.

Obviously, any defendant is innocent until proven guilty.

And nothing has yet been proven.

But it’s a public hot potato for the sponsors and the club.

Violence against women is not an attractive commodity to attach to your brand.

I was one of the first to denounce the misogyny of the world of football, which is slow to impose itself and can still be considered as dragging its feet.

The cynic in me will always wonder if clubs and sponsors are just going through this to protect their resources, brands and reputation.

The Crown Prosecution Service continues to fail women well. Fewer than one in 60 rape cases result in a charge.

I hope that’s an overly pessimistic view but, in all honesty, the veiled and deep-rooted sexism that has persisted in changing among some players was a big part of the reason I turned my back on football .

I will watch the World Cup but I cannot commit to the game at club level.

When my on-and-off boyfriend Stan Collymore dragged me to the back of a Scottish pub in Paris on the eve of the 1998 World Cup and kicked and punched me on the ground, the world didn’t quite know how to deal with it.

His club, Aston Villa, said they were “disappointed” and wanted to speak to their player “as soon as possible”.

But from memory he was not suspended or sacked

In fact, he pursued a career as a commentator.

Afterwards, I lost count of the conversations I had with other people associated with the world of football who threw lines at me like: ‘I heard you were provocative’.

I was none of that, but it was the perfect excuse to justify men’s violence against women.

In the future, I can’t imagine any conversation about puberty, intimacy, and sex without discussing consent.

We all have a duty to keep the lines of communication open with our children.

But from memory, he was not suspended or sacked.

In fact, he pursued a career as a commentator.

Subsequently, I lost count of the conversations I had with other people associated with the world of football who threw lines at me like, ‘I heard you were provocative’.

I was none of that, but it was the perfect excuse to justify men’s violence against women.

Going forward, I can’t imagine any conversations about puberty, intimacy, and sex without consent. This is definitely one for the boys.

We all have a duty to keep the lines of communication open with our children.

And we have to make them understand that without permission and approval, there is no place for sex. At all.

If you need help, go to womensaid.org.uk for help and information, including the Women’s Aid live chat (8am-6pm weekdays, 10am-6pm weekends )