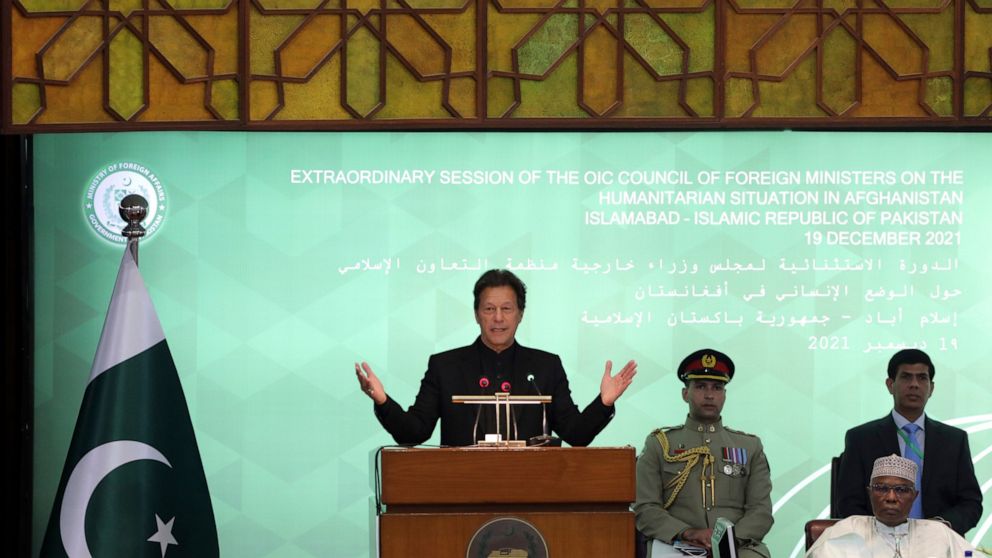 ISLAMABAD – The economic collapse of already dangerously precarious Afghanistan would have a “horrific” impact on the region and the world, successive speakers warned on Sunday at the start of a day-long summit of foreign ministers from dozens of Islamic countries. countries.

The hastily convened meeting of the Organization of Islamic Cooperation in Islamabad brought together dozens of foreign ministers with special representatives on Afghanistan from the great powers, including China, the United States and Russia.

The rally also included the UN Under-Secretary-General for Humanitarian Affairs as well as the President of the Islamic Development Bank Muhammad Sulaiman Al Jasser, who presented several concrete funding proposals. He said the IDB can manage trusts that could be used to transfer money to Afghanistan, jumpstart businesses and help save a deeply troubled economy.

The dire warnings called on the United States and other countries to ease sanctions, including the release of more than $ 10 billion in frozen funds following the Taliban takeover of Kabul on August 15.

Speakers also called for a swift opening of the country’s banking system and, collectively, with the United Nations and international banking institutions, for assistance to Afghanistan. Pakistani Prime Minister Imran Khan addressed his remarks to the United States, urging Washington to drop the preconditions for releasing desperately needed funds and restarting Afghanistan’s banking systems.

Khan appeared to offer the Taliban to overstep the boundaries of girls’ education, urging the world to understand “cultural sensitivities” and claiming that human rights and women’s rights mean different things in different countries. Other speakers, including OIC President Hussain Ibrahim Taha, stressed the need to protect human rights, especially those of women and girls.

The acting Foreign Minister of the new Taliban leadership, Amir Khan Muttaqi, was present in the main hall of the Pakistani Parliament, where dozens of foreign ministers from several of the 57 OIC countries had gathered.

“This rally is about the Afghan people,” said Pakistani Foreign Minister Shah Mahmood Qureshi, who warned that without immediate help Afghanistan was certain to collapse. He said this would have “horrific consequences” not only in Afghan lives lost to famine and disease, but would most certainly lead to a mass exodus of Afghans. Chaos would spread, he predicted, and allow terrorism and drug trafficking to flourish.

Martin Griffiths, UN Under Secretary for Humanitarian Affairs and Emergency Relief Coordinator, has warned that Afghanistan will not survive on donations alone. He urged donor countries to be flexible, allowing their money to pay the wages of public sector workers and to support “basic services such as health, education, electricity, livelihoods. sustenance, to give the Afghan people a chance through this winter and encouragement to stay at home with their families.

Beyond that, Griffiths said, “we need constructive engagement with the de facto authorities to clarify what we expect from each other.”

Afghanistan’s faltering economy, he added, requires decisive and compassionate action, or “I fear this fall will bring down the entire population.”

Griffiths said families simply don’t have the money for daily purchases like food and fuel as prices skyrocket. The cost of fuel has increased by around 40% and most families spend 80% of their money just on food.

He spelled out a number of striking statistics.

â€œUniversal poverty could reach 97% of the Afghan population. This could be the next dark step, â€he warned. â€œWithin a year, 30% of Afghanistan’s GDP (gross domestic product) could be totally lost, while male unemployment could double to 29%.

Next year, the UN would ask for $ 4.5 billion in aid from Afghanistan – this is the biggest request for humanitarian aid, he said.

In what appeared to be a message to the Taliban delegation, Qureshi and subsequent speakers, including Taha, emphasized the protection of human rights, especially those of women and girls.

In an interview with the Associated Press last week, Muttaqi said the new Afghan leadership is committed to educating girls and women in the workforce.

Yet four months after Taliban rule, girls are not allowed to attend high school in most provinces and although women have returned to work in much of the health sector, many female civil servants were prevented from working.

Meanwhile, Qureshi said he wanted the summit to end with concrete solutions to help Afghanistan and its people. He called on the summit to engage and channel aid to Afghanistan; increase investments bilaterally or through the OIC in the fields of education, health, technical and vocational skills; and to establish a group of experts from the OIC, United Nations, Islamic Development Bank and others to assist Afghanistan “to access legitimate banking services and alleviate the severe liquidity problems of the country. Afghan people â€.

He also called on participants to focus on food security, invest in capacity building in Afghanistan to fight terrorism and burgeoning drug trafficking.

“Finally, engage with the Afghan authorities to help meet the expectations of the international community, in particular with regard to political and social inclusion, respect for human rights, in particular the rights of women and girls, and the fight against terrorism â€, he declared,