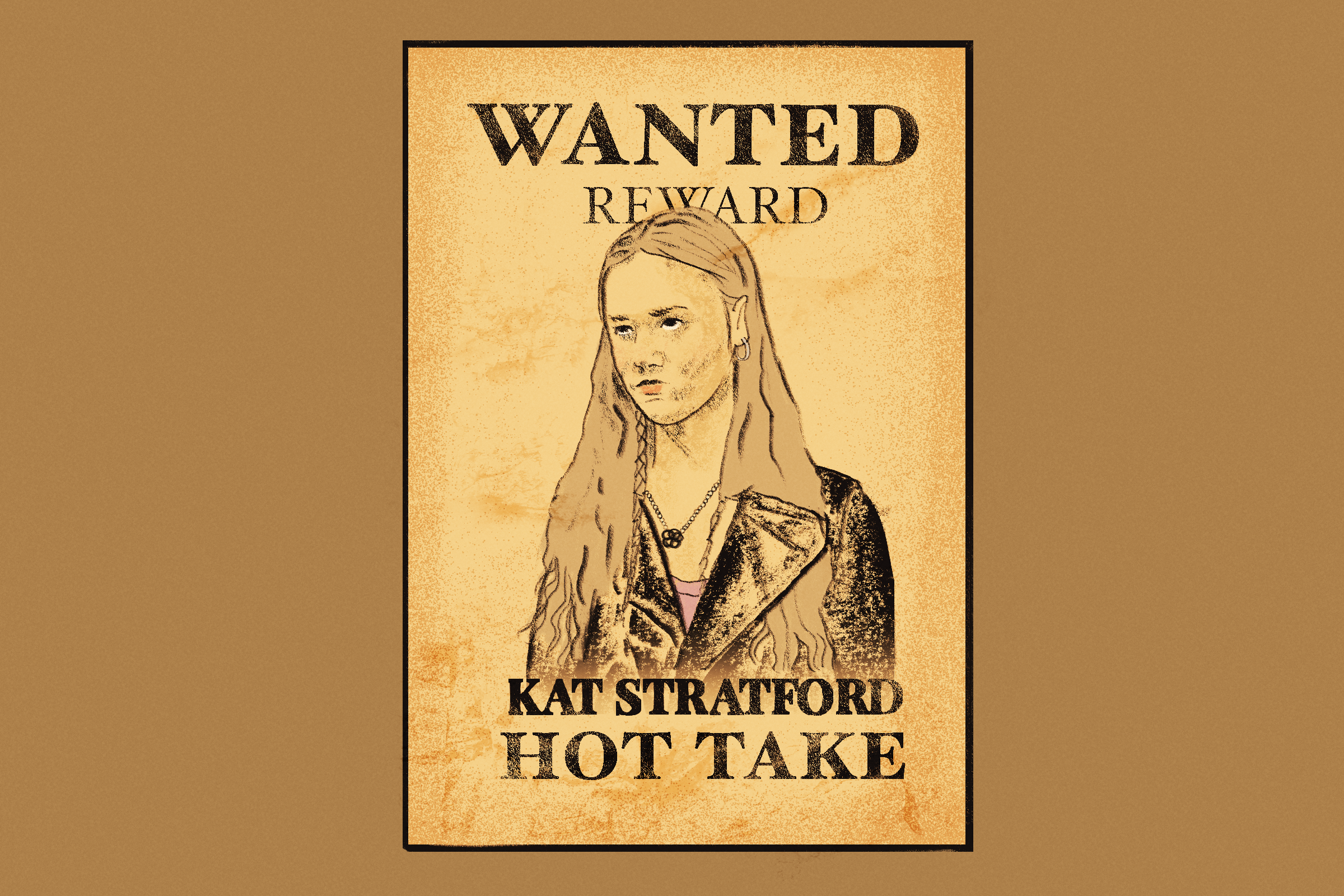 We’ve all wanted to be Kat Stratford (Julia Stiles, “Save the Last Dance”) from the 1999 hit movie “10 Things I Hate About You” at some point in our lives. Admit it. From her style, to her confidence, to the books she reads, to her “I don’t care” attitude, she is THAT girl. Its theme song is “Bad Reputation” by Joan Jett & the Blackhearts. Can she get any cooler than that? She seems to realize the facade she puts on effortlessly, but while that “aesthetic” appeals to modern audiences, myself included, we should be walking on eggshells idolizing characters like Kat. To think that Kat is an icon is fine (and accurate), but I don’t think I would call her a feminist. In her condescending version of feminism, Kat is the epitome of a white feminist, and her idolatry serves as a vehicle to silence minority experiences while giving white experiences most, if not all, of the attention.

Basking in her minimalist style, angsty girlish music and feminist prose, she is seen by many as an “obnoxious bitch”, as her guidance counselor explains. She places herself on a pedestal of trust. We can call her the queen of “fake it ’til you make it” since, as she shows near the end of the film, she has feelings similar to those her traditionally feminine sister Bianca (Larisa Oleynik, “The Secret World of Alex Mack”) experiences. Nonetheless, her personal portrayal of her superiority over everyone around her is problematic, ultimately contributing to her performative feminism and privilege.

She constantly judges her sister – and all the girls around her, for that matter – to express their femininity. Although Bianca is wrong to criticize Kat for choosing not to do what is considered “cool” and “popular”, Kat is also wrong to make fun of her sister because she likes to be feminine. She emphasizes her sister’s superficiality, saying she came from “Planet Look At Me, Look At Me” in an attempt to ridicule her sister and her interests. Kat thinks Bianca is helpless because of her hyperfemininity. Kat also goes so far as to criticize her best friend for wanting to go to prom, not understanding why anyone would go to such an “antiquated mating ritual.” In the end, Bianca proves, albeit stereotypically, that her femininity doesn’t stop her from standing up for herself and those she loves. She confronts Joey (Andrew Keegan, “Independence Day”) to defend Cameron (Joseph Gordon-Levitt, “Inception”), Kat, and herself, which serves as a vicarious reality check for Kat. So while their sibling relationship certainly improves throughout the film, pretending to be a feminist while dumping other girls isn’t very feminist of Kat and could even pass for “pick me one” behavior. daughter”.

While it’s understandable and important to have your own opinions, Kat tends to present hers as facts that people aren’t allowed to disagree with. To make matters worse, she outwardly fires Mr. Morgan (Daryl Mitchell, “Galaxy Quest”), her black teacher, for speaking out against her white privilege, when he sarcastically remarks that she’s overcome “all those years of suburban oppression of the upper middle class.” By refusing to be aware of her privilege, she communicates her opinion as the most reliable source for learning and understanding feminist theory when in reality she blatantly ignores the need for intersectionality in The film comes closest to her intersectional activism through her aforementioned encounters with Mr. Morgan, but this attempt fails, as she takes his constructive criticism as a personal attack, indirectly asserting that her opinion is factual.

While her complete disapproval of femininity and ignorance of her own privilege contribute to her white feminism, she is also downright mean. Nice and fake are not synonymous; Kat could have made an effort to be nice to the people she cared about and just ignored or addressed those who annoyed her in a more cordial way. She chooses to deal with all of her problems with violence and verbal abuse, which eventually turns her into a genuinely cruel person. She takes down the posters hanging at her school that people worked hard to make, she crashes into Joey’s car, and she replies to almost everyone, from her classmates to her teachers and even her father. It’s normal and completely understandable to be angry with the world, but if you expect respect, you must first respect others.

Kat definitely hides behind a mask of assurance – the viewer slowly learns that she too has feelings and is not an alien mutant, as Bianca likes to call her. She’s having a hard time opening up to Patrick (Heath Ledger, “The Dark Knight”) because of her past experience with Joey, so we have to cut some slack for her. After all, despite the tough front she puts up, she’s just a teenager trying to make her way through high school like everyone else. Finding out you’re just a pawn in a bet to put your little sister to bed would hurt anyone, and Kat is no exception to that generalization. However, her criticism of others’ emotionality while hiding and denying her own is hurtful, even if she doesn’t realize it.

Many may think that this analysis is overdoing it. She’s just a fictional character, and ultimately, maybe it’s not that deep. But pretending it’s not deep and continuing to idolize characters like Kat Stratford is exactly why it is. Of course, she’s the coolest. She’s mad at the world, and she’s not afraid to show it; she is very sure of who she is and doesn’t hide it from anyone. It is, to put it simply, an atmosphere. However, it is important to separate her likability and appeal as a character from her iconic status because by calling her a feminist icon we are indirectly silencing an entire group of women who need their stories told. , but which continue to be overlooked due to the idolatry of white feminists, both in the media and in real life.

What is a Reverse Mortgage? – Advisor Forbes Australia