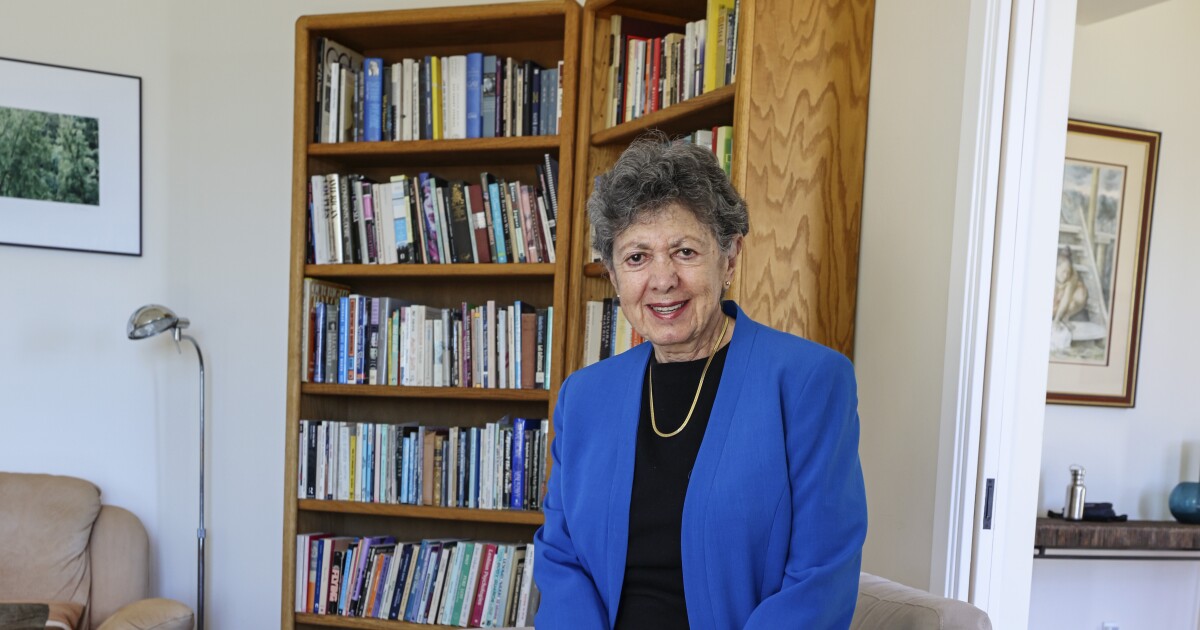 To say that La Jollan Lillian Faderman’s new book was a huge undertaking is, to say the least, an understatement.

The title of the book alone is telling. “Woman: The American History of an Idea” sounds like a dense concept – a comprehensive history of femininity in the Americas, exploring both the idea of ​​what it means to be a woman and how that idea has changed across the story.

“I’ve been collecting research for this book for about 20 years,” Faderman said. “Most of my books come from a kind of personal desire to learn more about everything that interests me.”

That Faderman spent two decades and countless hours on “Woman” should come as no surprise to anyone who knows the author, professor, and historian. She is often referred to as the “mother of lesbian history” and sometimes the “ancestor of gay and lesbian studies”.

One could say that the true genesis of the book “Woman” goes back more than 60 years.

Faderman, the daughter of a Latvian Jewish single mother, grew up in Boyle Heights, a mostly Mexican American neighborhood in east Los Angeles. Being “one of the few white girls” at school didn’t stop Faderman from befriending the pachucas (gang girls or rebel girls) at her school, and she became a “juvenile delinquent of sorts,” she said.

Faderman mentions this in a small introduction in “Woman” as a way to highlight when she became fascinated with the conceptualization of women – the idea of ​​what women are meant to be and act like and how that idea is often perpetuated. by external forces. .

“I realized I was already gay then, and I came from this working-class family and my mother was unmarried and worked in the garment industry,” Faderman, who has previously written at length, said. about her life in her 2003 memoir, “Naked in the Promised Land.” “So those images from the 1950s that absolutely bombarded me and my classmates, those images had nothing to do with us. weren’t like those pictures.

The images of crisp nuclear families weren’t particularly tied to a young lesbian who could have easily ended up in a juvenile detention center or boarding school if she hadn’t been a decent student, Faderman said, who ultimately completed a doctorate. program at UCLA.

The question of “why was this ideal of women created” and, more importantly, “why has its grip been so tenacious” has continued to plague her all these years, she said. declared.

“I wanted to know how those images came together, and I think that’s why I started working on the book,” Faderman said. “Understanding for myself how what influenced me so much as a child, something I knew I would never fit into, why that was the dominant image.

“I think this book was in the making even when I was a kid, when I couldn’t understand how different I was from what girls were supposed to be.”

Faderman, who once served as historian-in-residence at the Lambda Archives, said she took a “backwards” approach to researching “Woman.” She started in the early 20th century and continued to work until the early 17th century when the Americas were first colonized.

She also contrasted the way women were characterized and treated among white colonizers and native communities already in America.

The book recounts the importance for women to leave home and enter the workforce, as well as how the dawn of psychoanalysis in the late 19th and early 20th centuries informed the movement. radical sex” of the time and later informed both the sexual revolution and early-wave feminism.

She said ideas like women being weaker and having to be submissive to men would disappear for a while, then reappear later.

“It was just that there was always a backlash whenever women moved forward, and I think women were often complicit in the backlash because they were taking high profile jobs or earning a sum of money. ‘decent money,’ Faderman said, speaking specifically of the late 20th century. “They entered the workforce in large numbers and then they would come home and have to work a second shift because men were taught that things like housework were women’s work. They walked the dog and maybe took care of the car, but the rest was up to the woman. And that was too much for women.

Faderman also describes how these periods are related. For example, a chapter examining women proclaiming their sexual autonomy in the late 19th century, and how this may have contributed to their entry into the workforce, moves on to another chapter on women during the Depression and how these gains retreated. They are, she says, “interconnected”, one not occurring without the other.

“I think he continues to be very connected, and that’s in many ways what our contemporary #MeToo movement is all about,” Faderman said. “Just this recognition that as long as men feel free to sexually harass the women who work for them, women can never truly be equal. They are always reminded that their boss has jurisdiction over their pay and their boss makes demands that have nothing to do with their work.

“I think this book was in the making even when I was a kid, when I couldn’t understand how different I was from what girls were supposed to be.”

Additionally, there are sections on queer and BIPOC women such as Mary McLeod Bethune, Zitkala-Sa, Anna Julia Cooper and more.

“I think we’ve realized that America is very diverse and it’s important to tell these very diverse stories,” Faderman said. “I really wanted to include not just middle-class white women, but women of all classes, colors, and ethnicities. It has been of great value to me.

Historical perspectives on the future

Having researched, written and edited more than a dozen books, including a history of the LGBTQ community and movement (“The Gay Revolution” from 2015) and a biography of pioneering gay politician Harvey Milk (“Harvey Milk: His Lives and Death” from 2018), Faderman was asked if she sees things optimistically or if she sees the continued shift in the idea of ​​women.

“You know, when I was in college, I couldn’t have imagined a world like our contemporary world,” Faderman said. “The progress women have made in my lifetime is absolutely astounding.

“But as a historian, what I see is that it has often seemed amazing to others at other times in history. Like the ‘new woman’ of the early 20th century and then when we have I speculate a bit in the last chapter of the book, in the epilogue, about whether we might ever go back to what a woman was, and there are possible ways that a retreat might happen. reproduce.

Faderman points to the COVID-19 pandemic as concerning.

“Millions of women left or had to leave their jobs, in some cases because the jobs no longer existed and in other cases because they had school-aged children who were now at home and ‘there was no one to take care of them but the wife,’ Faderman said. ‘So that was a bit of a step backwards.’

Time will tell, but Faderman said the younger generation of LGBTQ people gives him hope that they will turn back the clock and that progress will be made, albeit incrementally.

“The number of transgender people has increased dramatically,” she said. “So I suspect that in past eras there were people who felt that but couldn’t talk about it. It had to be put down.

What this means for women as a concept idea, she’s not sure, but she said she hopes to write about it too one day.

Faderman is scheduled to appear at 7:30 p.m. Tuesday, May 10 at Warwick Bookstore, 7812 Girard Ave., La Jolla. Tickets are $32.50, including a copy of “Woman: The American History of an Idea.” For more information, visit warwicks.com. ◆