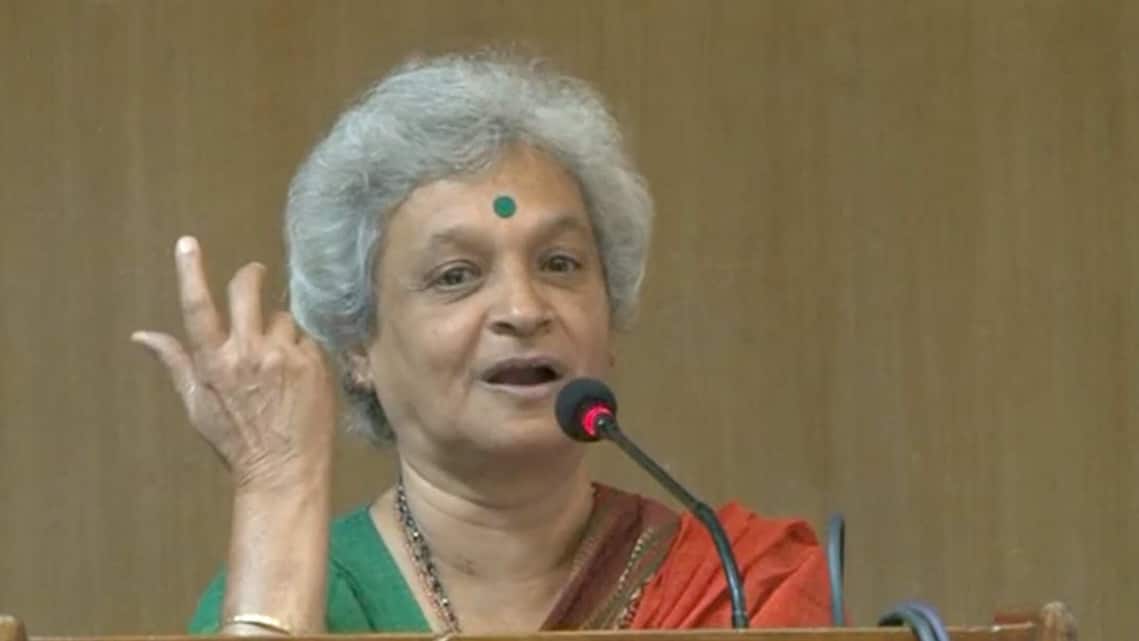 Make no mistake, this is a book about life although the stories may seem to linger on death. In Ambai’s red-necked green bird death is not in opposition to life, but in continuity with it.

Translated into English by GJV Prasad, the book originally in Tamil as Civuappuk Kazuttu Tan Oru Paccaip Paravai, was announced today as one of the recipients of the 2021 Sahitya Akademi Prize.

In the collection, the characters, human and others, may have left this plane or belong to another plane of existence; however, they continually extend from these parallel universes touching our physical world. She uses consciousness, metaphysics, psychoanalysis, mythology as lenses to see the inexplicable, almost mystical aspects of life. While some dimensions may seem irrational or incomprehensible, the tenderness and compassion of the narrative make them very valid.

Stories like that of the crow with the swollen throat whose penchant for fresh food reminds the protagonist of her father’s ardent desire for food, despite his throat cancer; or that of the city of Mumbai, where people, especially the struggling women who have made it their home, repeatedly appear like phoenixes, just like the city itself, all together weaving an intricate tapestry of the interdependence of life, death, memory, rituals and cultural awareness.

We meet protagonists like the dancer Kammumma who comes out of an incompatible marriage when she is very pregnant to live with a younger mridangam artist, sharing with him a love that “has” begotten “; the widow, Shanti, who enters into a new relationship with a younger man, Nandu, two years after the death of her beloved husband Arun. There is Shanti, alive and loving against society, and her own seemingly progressive but slyly conservative expectations of children, who is provocative at a stage of life when female mistrust is unacceptable. By quietly tearing up the agency, it preserves dignity. We also watch helplessly as widowed, aging and grieving Kamala make a decision, following a double heartbreak: the death of her husband but also the son’s insensitivity to the decision making process. Suicide, she decides with unwavering rationality, is to die with dignity – to die on your own terms as much as to live on your own terms. Her last wish is for her spine to survive the fall and remain intact, if only to teach her son the strength of people, especially women.

As is evident, Ambai’s feminist credentials do not need to be worked on. She does not reject “the other” and does not rely on binaries and oppositions to corroborate it. There is generosity and space for imperfect individuals and always the possibility of redemption. Its male protagonists (yes, there are a couple) like the protagonist of “The Pond” and Achyut are full feminists, not just allies. Other men also Rajappa, Vasanth, Nikhil, Arun or Nandu can have their faults but, they are neither chauvinist nor misogynist. We hear echoes from Simone de Beauvoir to Donna Harraway, as Ambai intertwines contemporary history, geography, psychoanalysis, politics, resistance poetry and ballads while also making reference to parallels in myth and culture. science fiction. She even lingers on the destruction of nature and the native but also on the creation of magnificent and dreamlike cities where new forms of creativity emerge through industrialization, modernity and technological fantasies.

The collection of stories here seems to confirm that if we can accept that life is not oppositional and that creating meaning does not have to be binary, then perhaps we could see that a richer life experience. is possible. Finally, a quick word on the ubiquitous strains of music. The stories are infused with music from various genres – contemporary, popular, Bollywood, old Tamil film music as well as more severe Carnatic music with its intricate ragas, creating a mood and a backdrop in which its characters live their very lives. ‘they can fall to their death.

Prasad, also a writer and poet, seems to have internalized Ambai’s translation metaphor as the preparation of the soil to nourish the original seed. Like a savvy gardener, it retains just enough of the original soil – the use of Tamil words and words, verses, as well as songs from other Indian languages ​​- for the seed to feel the comfort of familiarity to grow. and flourish.

It is somewhat fortuitous that in a collection of short fictional translations, at least two of the stories – the title story, “A Green Bird with a Red Neck” and “The Lion’s Tail” dwell on concepts related to the language and communication. While the former considers concepts such as hearing, sound, speech and communication, the latter considers translation or perhaps even the insufficiency of language requiring the creation of new words for new realities. .

“A positive mentality has been instilled in society”