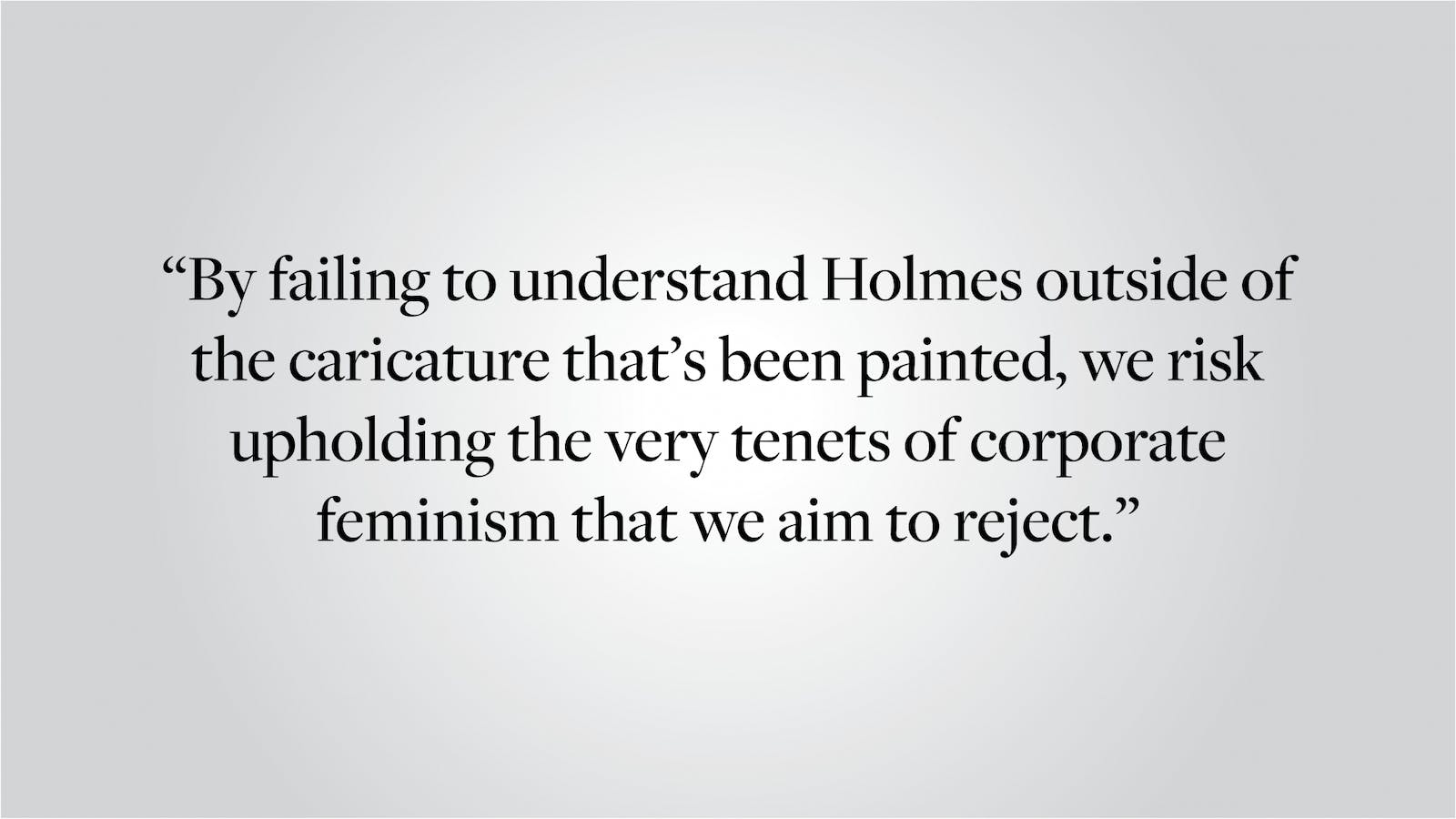 McGrath ’24: The Cult of Elizabeth Holmes

“First they think you’re crazy, then they fight you, then all of a sudden you change the world,” former Theranos CEO Elizabeth Holmes told CNBC in a 2015 interview. Once touted by Forbes as one of America’s youngest self-made billionaire women, Holmes is currently on trial for fraud. If convicted, this former feminist icon faces up to 20 years in prison.

Elizabeth Holmes was just 19 when she founded Theranos in 2003. Always afraid of needles, Holmes set out to revolutionize the field of diagnostics with new technology that she said could reliably detect a variety of health problems with just a small drop of blood. As a young Stanford University dropout, Holmes and her startup caught the attention of several prominent investors, including former Secretary of State Henry Kissinger, media mogul Rupert Murdoch, former Secretary to Education Betsy DeVos and eminent lawyer David Boies. At its peak, Theranos was valued at over $ 9 billion despite the fact that, as reporters and prosecutors later point out, Holmes’ allegedly revolutionary blood test device was totally bogus.

Holmes’ success story, and now the controversy surrounding it, have both found a media spotlight. By portraying Holmes strictly as a villain, however, we are ultimately perpetuating the misogyny already rampant in Silicon Valley that places a significantly higher standard on female CEOs than their male counterparts. That’s not to say Holmes isn’t guilty. But Holmes is a symptom of a much more pernicious cultural problem in the tech industry, and his actions need to be placed in that context.

Holmes, while obviously a particularly fraudulent actor, also reflects a broader tension in feminist culture. With an infamous (and allegedly forced) deep voice and Steve Jobs-inspired turtleneck, Holmes never missed an opportunity to emphasize her identity as a self-taught woman. At its core, this kind of ‘Girl Boss’ feminism, a term coined by NastyGal CEO Sophia Amoruso in her now infamous memoir #GirlBoss, attempts to make every woman’s financial and professional success a step forward for her. whole feminist cause. As I argued in a previous column, with the exception of those lucky few (and usually white) CEOs arriving on corporate boards, for the rest of us this brand of #GirlBoss feminism pushes superficial feminist gains at the expense of sweeping political and social change.

With her simultaneous adherence to these feminist tenets and her alleged crook status, it’s easy to see why Holmes became the star child of this hollow brand of feminism. A slew of viral memes accounts have even begun to satirically hail Holmes as their feminist hero. After all, as Rania Blaik, one of the TikTokers behind the meme, told the LA Times, “Having a fraudulent healthcare company with a horrible culture and simultaneously being named Glamor’s Woman of the Year is deeply funny. “

From Marie-Antoinette to Monica Lewinsky, the wicked trope is as ubiquitous as it is captivating. #GirlBoss was trying to fend off this exact trend. However, in an act of overcorrection, this line of thinking can perversely trick us into idolizing “Nasty Women” not despite their faults, but because of them. Because of this impulse, an entire generation of women tried in vain to be simultaneously empowered by Kim Kardashian and Kellyanne Conway when in reality we probably shouldn’t idolize either. All of this to say, however, that we can condemn Holmes’ actions without needing to be somehow empowered by them.

On the flip side, it’s worth noting how vast the media’s obsession with Holmes has grown. Since Wall Street Journal reporter John Carreyrou first asked about Theranos in 2015, Holmes has been the subject of countless articles and essays, multiple podcast series, a New York bestseller. York Times, blockbuster HBO documentary and Adam McKay film on hold. with Jennifer Lawrence. As the focus of so many sensational media outlets, it’s worth asking why the legend of Holmes and his disgraced company has been so easily absorbed into public blood.

Ironically, misogyny itself most certainly has something to do with it. Fraudulent businessmen are nothing new. But a crook woman? It is noteworthy. And while this review may be well deserved, it doesn’t affect Holmes in a vacuum. According to the New York Times, the women of Silicon Valley continue to suffer from the aftermath of Theranos’ fall. Haunted by Holmes’ legacy, women in tech – an already notoriously male-dominated field – would find it even more difficult to court investors than before. And as the author of the story, Erin Griffith, vividly pointed out in an interview with Marketplace Tech, “Every male founder who works, say, on desktop sharing, is not compared to WeWork and Adam Neumann. .

While the extent of Theranos’ fraud was definitely unusual, the ‘pretend until you do’ approach that Holmes wholeheartedly embraced certainly was not. Dependent on venture capital, Silicon Valley startups will regularly overestimate their progress in order to attract high-profile investors who, more often than not, are more successfully drawn to flashy displays of progress than detailed blueprints. Those familiar with Silicon Valley argue that this high level of risk-taking is just an accepted part of the culture. Apparently even the first iPhone was still riddled with bugs when Apple founder (and Holmes’ black turtleneck muse) Steve Jobs gave the product the first demo. And when it comes to Holmes’ legacy as a woman entrepreneur, one could say that she was simply following the examples of her predecessors by “leaning in”.

Once hailed as an icon for women around the world, Holmes has quickly become a left-wing meme and an uplifting narrative for Silicon Valley’s most reactionary investors. It seems the one thing we love more than a self-taught woman is the opportunity to take one down – love her or hate her, it seems the media and tech industry is unable to understand Holmes outside of it. of these dehumanizing tropes. Holmes was definitely a bad actor. But by reducing her to a cartoon villain, we’re ultimately acting on the same reductive instinct that made #GirlBoss think of her as an idol.

To be clear, I have no interest in defending Elizabeth Holmes. Assuming the charges against her to be true, she knowingly defrauded her investors out of millions and, more seriously, actively endangered the lives of patients in order to continue her career. It is also by no means a defense of #GirlBoss feminism. On the contrary, by failing to understand Holmes outside of the caricature that has been painted, we risk defending the very tenets of corporate feminism that we aim to reject. Just as #GirlBoss feminism celebrates the success of already privileged women while neglecting wider social, political and economic inequalities, focusing on Holmes as an individual also fails to capture the big picture. By forcing Holmes into clichés, we fail to recognize the Silicon Valley culture that encouraged his neglect as well as the story of misogyny that #GirlBoss was trying (and doesn’t) to resolve.

If we are serious about ending #GirlBoss feminism, we have to go beyond the push to see women in a binary hero / villain setting. Assuming the prosecution wins, Elizabeth Holmes is a con artist and con artist. She’s not, however, just a madonna or a whore or an icon or a meme – she’s a bad actor operating in a bad system.

Women firefighters from LAFD are victims of hazing and reprisals, testifies the battalion commander | Business

Does hybrid work help or harm women in the workplace?