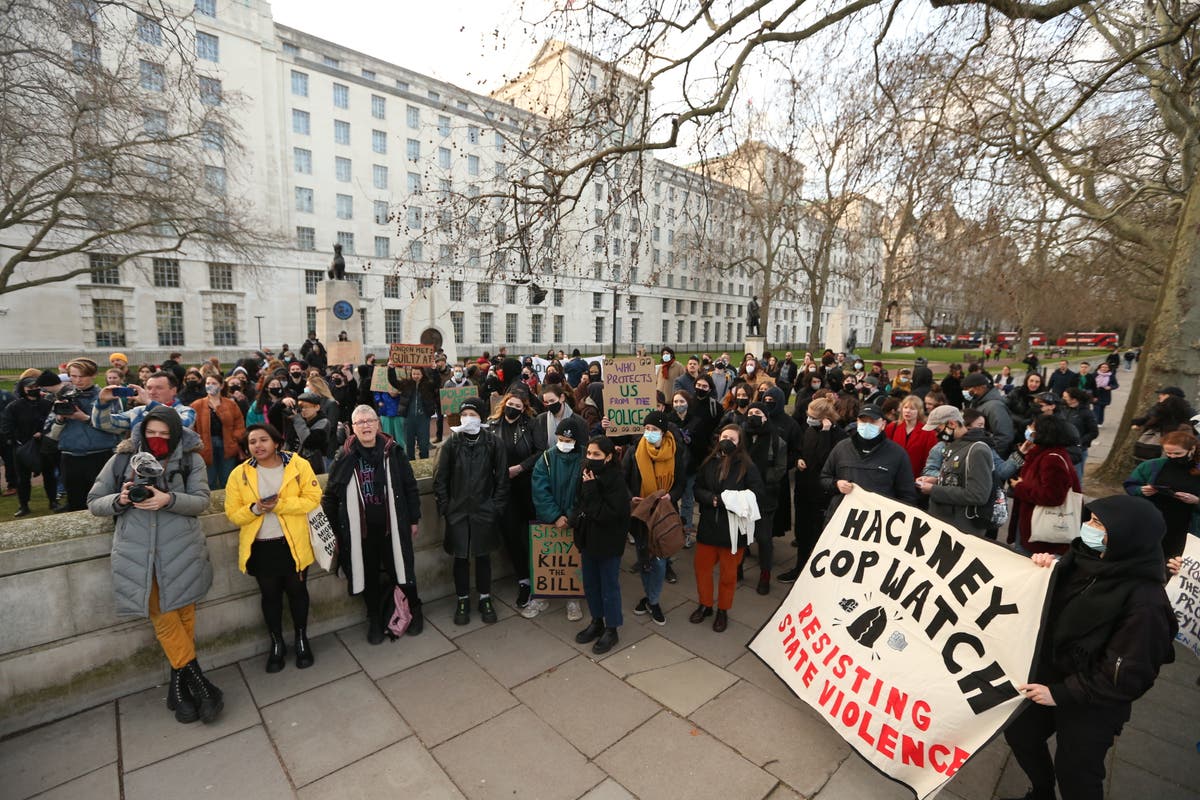 Hundreds of protesters took to the streets of Westminster with the deafening cry of rape alarms as part of a protest against the Metropolitan Police.

The march marked just over a year since serving officer Wayne Couzens abducted Sarah Everard, and protesters told the PA news agency they were demanding ‘radical change’ from a Met “rotten to the core”.

Revisiting advice given in the wake of Ms Everard’s murder, campaigner Jill Mountford, 61, told women ‘women should never again be told the answer is to wear a rape alarm’, while Patsy Stevenson, who was arrested at an impromptu vigil for Ms Everard last year, has called on Home Secretary Priti Patel to resign.

“We should never again be told that the answer is to wear a rape alarm or stay indoors.

Ms Stevenson addressed the crowd at Charing Cross police station as dozens of officers looked on and told PA she was calling for a ‘radical change to the whole policing system’.

When asked how the Met can restore public trust, she replied: ‘The first thing is accountability, raise your hand and admit you’ve done something wrong.

“Secondly, they need to understand that there needs to be a radical change in the whole policing system.

“Right now we don’t even need the police, and that’s not how it should be.”

Asked if she thought the new management after the resignation of Met Commissioner Dame Cressida Dick would amount to a change, Ms Stevenson said: “Just because she’s been away doesn’t mean anything will change.”

Wiping away tears as she addressed the crowd, Ms Stevenson said Ms Patel would then have to resign.

“Priti Patel is next by the way, let’s not forget who’s in charge.

“This vigil was a vigil for Sarah Everard, and so many women are murdered by men.

“How dare they tell us to stay inside.”

Protester Marvina Newton described the police as “a corrupt system that is rotten to the core”.

“The bigger system is broken,” she told PA.

“We want to kill the Policing, Crime and Punishment Bill, we want to make sure that our children’s children can have the democratic right to fight an oppressive power.”

If passed, the bill would give police greater powers to control protests by imposing start and end times, setting noise limits and fining protesters who break the rules until at £2,500.

The bill is opposed by Labor and the Liberal Democrats in its current form.

Saturday’s protest also comes a day after High Court judges found the Met breached the rights of the organizers of the vigil for Ms Everard by ‘failing in its legal duty’ to determine whether they had an ‘excuse’ reasonable” to hold the gathering amid Covid -19 restrictions.

Reclaim These Streets held the vigil for Ms Everard near where she disappeared in Clapham, south London, in March last year.