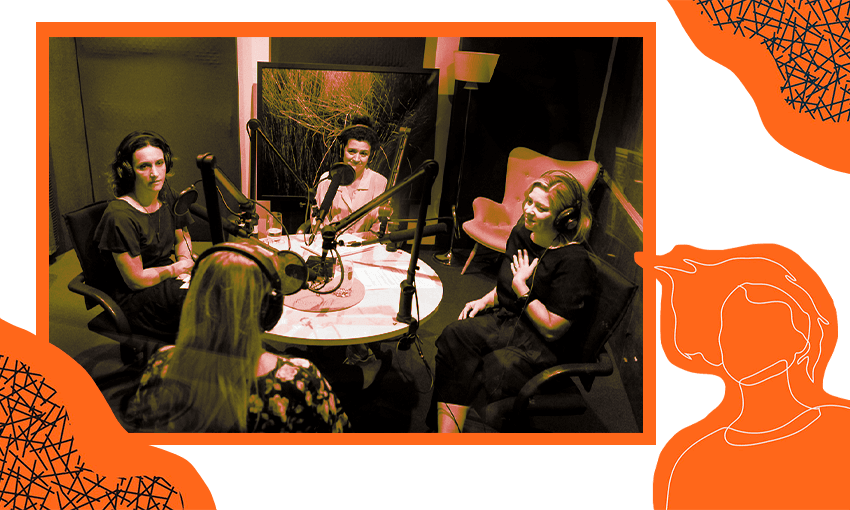 Still, now is the perfect time to be a feminist in Aotearoa

There is power in women’s stories and Tell Me About It is a place where they can be told, write the new podcast’s co-hosts, senior Stuff reporters Michelle Duff and Kirsty Johnston.

There has never been a better time to be a feminist. A deadly pandemic is sweeping the globe. The waves greedily lick coastal properties, which always cost more than what your life is worth. The days of the penguins are numbered. Somewhere in Ōtautahi, a guy who has already been raped while being served an overly hot latte lashes out at 800 words of incoherent absurdity about “freedom” and “rights”. Social media platforms that break down nuance and reward rage risk pitting us all against each other and undermining democracy. The online misogynist chuckles.

Everything sucks, but there has never been a better time to be a feminist.

If there has ever been a moment to get angry with patriarchal and colonial power structures, to wonder why so many women are tearing their hair out and being supposed to work at work while home-schooling their children during the lockdown, why daycare is so expensive, why single Maori mothers struggle to get rentals and feed their children, why misinformation is rife with racism, sexism and transphobia, then this is it. It’s time.

There was a time when the Spice Girls sang “Wannabe” when it was argued that feminists had achieved their goals. In Aotearoa, we had the trifecta of Helen Clark as Prime Minister, Silvia Cartwright as Governor General and Sian Elias as Chief Justice. But it was never more than smoke and mirrors. Even they couldn’t overemphasize gender issues due to men’s growing anxiety about taking over. #MeToo and the worldwide spread of rampant sexual harassment and assault have taken off the polish. Now we have Covid, a crisis that has exposed the continuing injustice of whose work is valued and who isn’t – and that while we say ‘essential’ we don’t mean ‘well paid’.

As reporters, we have been writing for years about systemic discrimination against women and minorities. We both started writing in other areas – Kirsty in education and Michelle in health – but all paths inevitably led to one area; inequality. It is endemic in our society. It’s worse if you’re female (we don’t like this binary term but find it still useful for the general public when it comes to clarifying gender impacts in our reporting) and it still is worse if you are Maori, Pasifika, Asian or an ethnic, trans or gender diverse, disabled, queer, old, poor. It’s layers upon layers.

Around 2018, when Michelle was reporting as part of Team Stuff’s Me Too led by Alison Mau and Kirsty investigating why rapes go unreported to police for the New Zealand Herald, we started to to call. Journalists from competing media agencies are generally discouraged from doing so. But we needed someone else who could understand. As we spoke, we found that we echoed the frustrations of people we spoke to for stories. Why was it so hard? We heard from college students, mothers, lawyers, social workers, actors, doctors, talk about all the ways the system felt rigged against them, big or small. And some of their stories were funny; there were so many intricate and messy complexities in women’s lives, and so much of what people shared – so many twists and turns, little gold nuggets – that we couldn’t fit into the rooms that ended up be printed. There were themes we were dying to explore.

Everyone wants to do a podcast, right? Our first pitch was mainly about us threading into each other, with a few guests. We could have done this podcast because we’re sure we’re hilarious, and maybe people could have listened. But in 2021, it seemed less and less relevant. Even the most well-meaning feminist Pākehā has work to do to unlearn the colonial privilege that has been deeply rooted in us from birth. And as journalists, it seemed our job was to get out of the way. So, with the help of producer Noelle McCarthy, we focused on the people at the center of our stories, and Tell Me About It was born.

From the first customer, we knew it was the right choice. “S,” who went through two trials to bring her rapist to justice, rushed in and pragmatically exposed all the ways the system made her feel like she didn’t exist. We cried. We laughed. We got fucking mad and incredulous, and then the next week we did it all over again. No woman we asked to come to the studio said no. In this week’s episode, you’ll hear Sara and Ratahi, a mother and teenage daughter who drove for hours to be there, so Ratahi can hear her mother’s story in its entirety for the first time. Over the course of the series, you will hear women running daycares and hotels, and tell their bosses that they have a “date” during their lunch break and might be late. They come in and share, unfiltered, the most intimate details of the pain – and the joy – of their lives.

As journalists, it’s a privilege to hear people’s stories. Some of the women who will appear on the podcast are the ones we spoke to during our report and couldn’t get out of our heads. Some of them that we meet for the first time. Some will be at the heart of storytelling, or will have played a role in milestone events.

There is power in these words, heard together. Collectively it’s like a loud house party, a real high school sleepover, or a primitive scream. Sometimes all three at the same time.

The women are ready to speak. We’re here to listen to you, and we hope you will too.

Tell me about it: True stories behind the news are available wherever you get your podcasts.