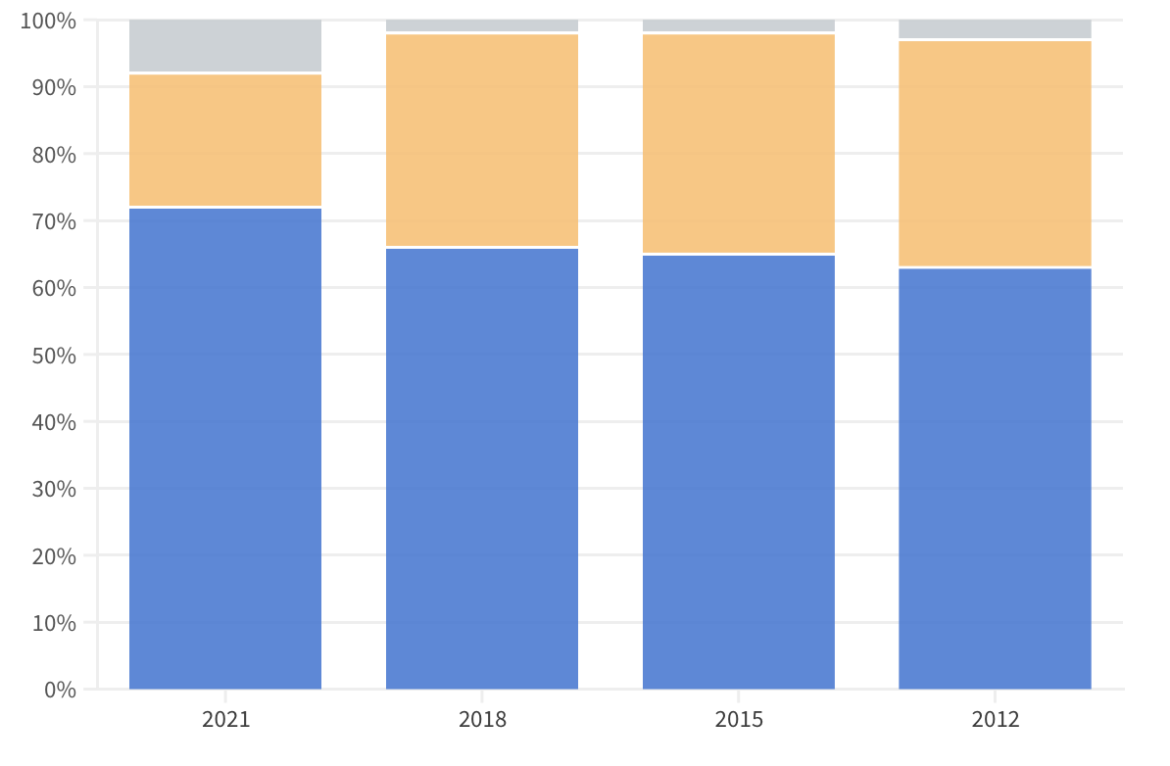 Monroe County residents are ready to embrace initiatives aimed at reducing the impact of racism, according to a new survey from the Siena College Research Institute. Residents are more likely to recognize racism than they were a decade ago.

“Residents of Monroe County increasingly recognize the impact of discrimination on their neighbors,” said Jennifer Leonard, president and CEO of the Rochester Area Community Foundation. “The poll shows that they are now more aware of and, perhaps as a result, supportive of efforts to redress historic inequalities.”

Four in five Monroe County residents, or 81%, between the ages of 18 and 34, believe minorities, including African Americans, Hispanics and Asians, experience racial or ethnic discrimination. Seventy-two percent of all survey respondents agree, up from 63% in 2012.

These findings are part of a fourth triennial survey commissioned by the Community Foundation and the Democrat and Chronicle. The RACF launched the series of polls in 2012 after ACT Rochester, an affiliate of the Community Foundation, documented severe racial and ethnic disparities that were holding back the community’s progress, officials said.

Here are some key findings from the December 2021 survey:

■ Seven in 10 (71%) respondents said that racial or ethnic discrimination is a very important (28%) or somewhat important (43%) problem in Monroe County. In 2012, less than half agreed with this statement.

■ Whites, African Americans, and Hispanics overwhelmingly agree (85%, 89%, and 79%, respectively) that African Americans are the “most frequently discriminated against” minority group in Monroe County.

■ Almost half of Black respondents (45%) and more than a third of Hispanic respondents (35%) said they could think of a time in the past few months when they were treated unfairly because of their race, ethnic origin or other personal characteristic. Only 15% of whites said the same.

Fifty-two percent of survey respondents believe there is a widening gap between blacks and whites in their standard of living, up from 47% in the 2018 poll. Respondents who felt the gap had narrowed fell from 45% three years ago to 31% in the last survey.

At least three-quarters of those polled said they would support efforts to lessen the impact of racism. These include creating new schools with specialized programs that would be open to suburban and urban students (75%), a concept promoted by the Great Schools for All initiative; a plan to create more affordable housing in the suburbs (76%); and a jobs program that would encourage employers to hire people living in poverty (82%). Seventy-six percent were in favor of local minority-owned businesses having access to more loans.

The majority of survey respondents supported allocating funds to support neighborhoods that have been affected by discriminatory policies, increasing education about the history of discrimination, and creating diverse neighborhoods in the county. The North Star Coalition and the PathStone Foundation are working on the first two proposals.

Fifty-one percent of survey participants strongly or somewhat agree with this statement: “Some have said that one of the reasons why many people, especially many people of color, cannot freedom from poverty is that the game is against them, that is, there are public policies and practices in the marketplace that benefit white people and disadvantage people of color.” The “totally agree” group has increased from 16% to 25% since 2015.

The Siena poll, conducted among 707 Monroe County residents, has a margin of error of +/- 4.7%. Thirty-five percent of respondents lived in the city of Rochester, mirroring the county’s population. Respondents were 69% white, 13% African American/Black, and 8% Hispanic/Latino.

The Beacon welcomes feedback from readers who adhere to our comment policy including the use of their full real name.