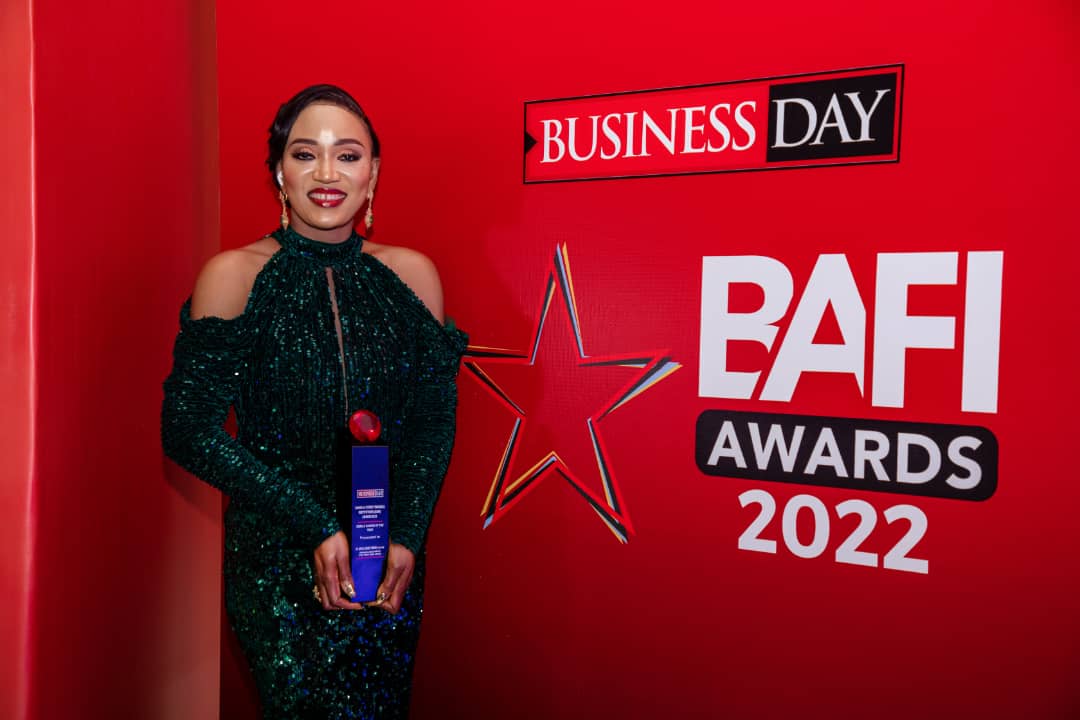 From left to right: Mr. Mudassir Amray, MD/CEO, Union Bank of Nigeria Plc and Dr. Adaeze Udensi, MD/CEO, Titan Trust Bank Ltd, displaying the award plaques for ‘Deal of the Year’ and ‘Female Banker of the Year” respectively during the 2022 edition of the BusinessDay Banks and other Financial Institutions (BAFI) Awards Ceremony, held on Saturday, November 5, 2022 in Lagos.

Dr. Adaeze Udensi, Managing Director/Chief Executive of Titan Trust Bank, presents her award as “2022 Female Banker of the Year” during the BusinessDay Banks and other Financial Institutions (BAFI) Awards Ceremony, which was held on Saturday November 5, 2022 in Lagos.

While TTB won the ‘Deal of the Year’ award, for its recent acquisition of the 105-year-old Union Bank of Nigeria, just three years after its inception, Dr Adaeze was named the ‘Female Banker of the Year”.

According to organizers, BusinessDay Newspapers, the bank won the award in recognition of its willingness and tenacity to overcome significant obstacles, including complexity, regulatory hurdles, and to set the tone for the market or establish a model for future transactions.

“When the deal was first announced,” many wondered how a three-year-old institution found the nerve, support and negotiating leverage to acquire a venerable institution.

“The stealth and breadth of the deal deserves recognition. Indeed, the potential of this deal to fundamentally reshape the banking industry is beyond doubt,” the newspaper said.

Receiving the award on behalf of the bank, Mr. Mudassir Amray, Managing Director/CEO of Union Bank, said: “Recognitions like this show that we are indeed doing something right, and I want to assure everyone our customers and stakeholders that we will continue to leverage the platforms and dedicated workforce to further strengthen our drive to reach the top.

“We promise to do everything we can to ensure that our customers remain at the center of our decisions in all aspects and dimensions of our remarkable organization, and that is more than a clear call for service excellence.

“We therefore dedicate this award to all of our stakeholders, including customers, shareholders, board, senior management and staff.”

Recall that Titan Trust Bank, in pursuit of a journey of expansion with the objective of building a stronger brand capable of taking greater market share in a continent in search of financial inclusion, has taken the financial sector by surprise by announcing the acquisition of a 93.41% stake in Union Bank of Nigeria, Nigeria’s second oldest lender in its few years of operation. The deal, considered to be one of the biggest takeover deals in the history of the Nigerian banking sector, with an off-market deal worth N191 billion, was however formalized earlier this year with Tropical General Investments Limited (TGI Group), the parent company of TTB. , becoming the majority shareholder and lead investor in UBN. The deal, however, was applauded by shareholders, investors and industry watchers who described it as a win-win for Nigerians and the Nigerian economy.

To further demonstrate its commitment to protecting Nigerians and their investments and creating wealth for its shareholders, TTB recently offered majority and minority shareholders of Union Bank a premium of N7 per share in a public offering of compulsory purchase (MTO), an uncommon gesture in Nigeria. the banking industry.

A few months after the acquisition of Union Bank by the TGI group, the retail lender is starting to gain a lot of stability and also gaining public confidence following the emergence of a new management team that the group has assembled. to make it a bank of choice for Nigerians in the very near future.

For Dr Udensi, organizers said the award was given to the Outstanding Female Banker in recognition of her outstanding leadership, vision, impact, contributions and achievements in banking and the economy Nigerian.

Organizers specifically noted that “Dr. Adaeze’s effortless grace in managing strategic and highly demanding portfolios, often growing market share in emerging areas, fending off competition in crowded markets, or achieving ambitious goals assigned by the Board of Directors , was unparalleled.

“It is an exemplary company that over its career has consistently exercised transformative leadership across different roles and institutions. It has established a verifiable record of growth on all relevant KPIs, created new sustainable economic opportunities for customers of the bank and also inspired a young generation of bankers thanks to his dedication, his dynamism and his values.

Upon receiving the award at the event, Dr. Adaeze said, “I am honored by this unique recognition. It will certainly inspire me to work harder to create more impact in the financial sector through Titan Trust Bank, which has innovated in many fields since entering the fray a few years ago.

It should be noted that Dr. Udensi, alongside other senior management of Titan Trust Bank, was instrumental in the bank’s meteoric record and recent acquisition of 93.41% of the shares of 105-year-old Union Bank of Nigeria in just three years of its existence. establishment.

A naturally gifted marketer and inspirational manager, Dr. Adaeze also has a strong talent for the operational aspects of banking.

Since joining Titan Trust Bank, Dr. Adaeze, who has over 26 years of banking experience across all banking sectors, has shown great talent in scaling a start- up to become, without a shadow of a doubt, the new leading commercial bank in the largest bank in Africa. economy.

Can improving child and adolescent care infrastructure boost the economy and promote equality in Argentina?