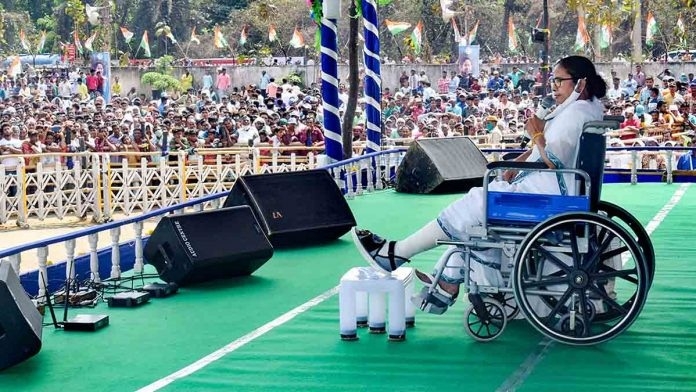 CLAIMING that the TMC will never allow the NPR exercise in West Bengal, Banerjee alleged, “The BJP will omit the names of the voters if they are not found at home when the enumerators visit. They’ll just kick you (people out). But we wouldn’t allow them to update the registry here. “Not a single member of a family, not a single citizen of the country can be deported from Bengal,” she said. The National Population Register (NPR) is a document containing the names of the “usual residents” of the country.

Admitting that relief distributed after Cyclone Amphan by his government might have missed “one or two” beneficiaries, West Bengal Chief Minister Mamata Banerjee on Thursday said BJP leaders were nowhere to be found during the crisis. Addressing a rally here in Paschim Medinipur, the TMC leader claimed that BJP leaders are ‘coming here in helicopters and planes from outside with loads of money to lure voters and loot votes’ just before the elections. “Thousands of crores of rupees have been distributed by the TMC government to those affected by the cyclone. There could have been one or two exceptions… But we rushed to be on the people’s side.

Where were the BJP leaders then? In times of human miseries, they are always absent,” she said. Calling the BJP a “party of rioters”, she said “We don’t want violence, bloodshed and we don’t want retaliatory politics to enter West Bengal.” Mamata Banerjee has said she will bring “parivartan” (change) to Delhi after winning the World Bank Assembly elections. The Chief Minister has also pledged an education loan of Rs 10 lakh to students at just 4% interest to pursue higher education.