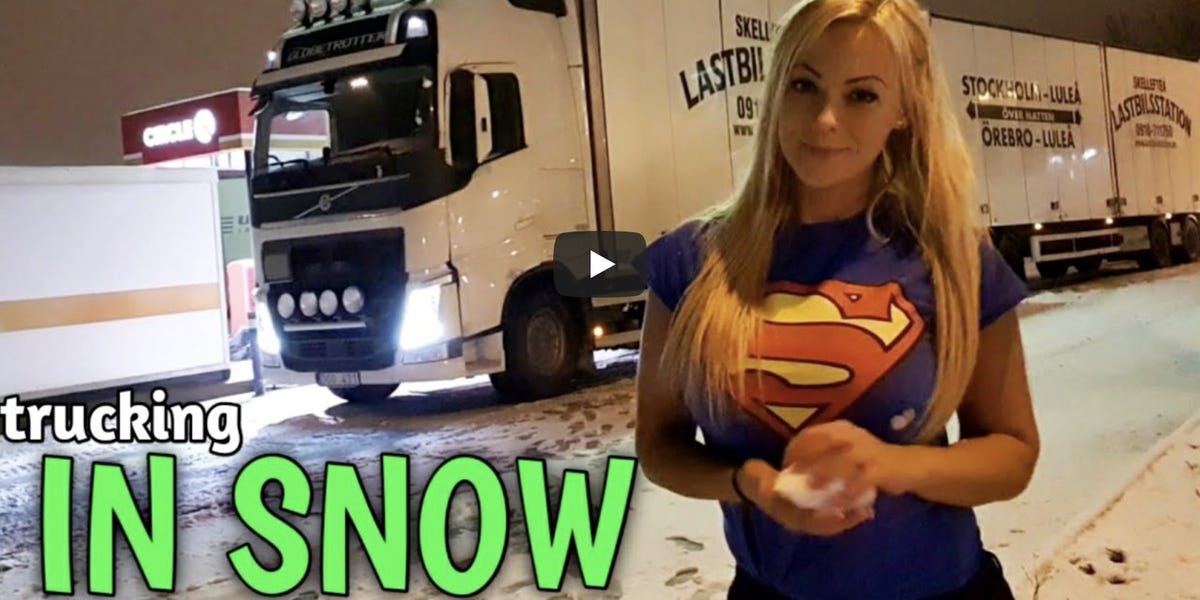 Swedish truck driver Angelica Larsson is one of the world’s top social media “trucking influencers”, earning $6,000 a month on YouTube.

That’s more than double what she earns hauling goods up the sides of snow-capped mountains in Sweden, the 31-year-old said in an interview with Insider. And yet she hasn’t spent any of the income she makes from creating content, she said.

Instead, she saves money to travel and mentor young women looking to break into the trucking industry.

“In the whole of Europe, like in Bulgaria or Russia, there aren’t many girls driving,” she said. “I have a lot of followers outside of Sweden…it’s important for them to see that the girls can also drive trucks.”

Larsson said she first won her following because it was “a little strange” for a 5-foot-tall woman to use heavy equipment in dangerous weather conditions.

“I’m a little girl who drives big trucks,” she told Insider. “Ten years ago it wasn’t so common.”

While many users comment on Larsson’s looks – some even going so far as to crown her the “most beautiful truck driver” in the world – she is also recognized for her technical skills. Videos show Larsson removing a water bottle cap with a forklift, maneuvering icy mountain roads in reverse, and driving everything from bulldozers to crawlers to snow plows.

“I want to show the world that a girl can do the same thing a guy can do,” she told Insider. “I feel like that’s kind of my goal.”

As Larsson’s digital presence has grown, so too has the wider trucking community grown on social media. A recent industry roundup of the 25 highest earning truckers on YouTube, TikTok, Twitter and Instagram estimates payouts of up to $4,000 per post. Truckers Adryana Oltean and Alex Nino both have over a million followers on TikTok.

Larsson told Insider that her income was misreported, adding that she doesn’t make money on Instagram. As for TikTok, she said she was too busy managing her other accounts to create a new one.

Posting one YouTube video a week takes about 20 hours, Larsson said, because she records, edits and distributes the vlogs herself. She recently started a new driving position and requested one day off per week to focus on content creation. Currently, her YouTube channel takes up about 50% of her work week, she added.

Although the channel is his personal passion, internet fame has also attracted unwanted attention.

In a video, Larsson told viewers that because personal information is publicly viewable in Sweden, several stalkers showed up at her home, her parents’ house, and even followed her to work.

“I think it’s a little scary and… I don’t feel very comfortable,” she said in a September 2020 video. “You shouldn’t come to someone like that. It’s not good.”

This eventually caused Larsson to move out and create a “fake identity” to avoid future confrontations. Beyond safety concerns, she told Insider that she fears her dual career as a trucker and influencer could prevent her from starting a family.

“I really want to finish this big project that I’m working on,” she said, referring to her travel and mentorship plans being pushed back due to the pandemic.

“I really hope…it’s not too late to start a family and become a mom. That’s what stresses me out the most.”