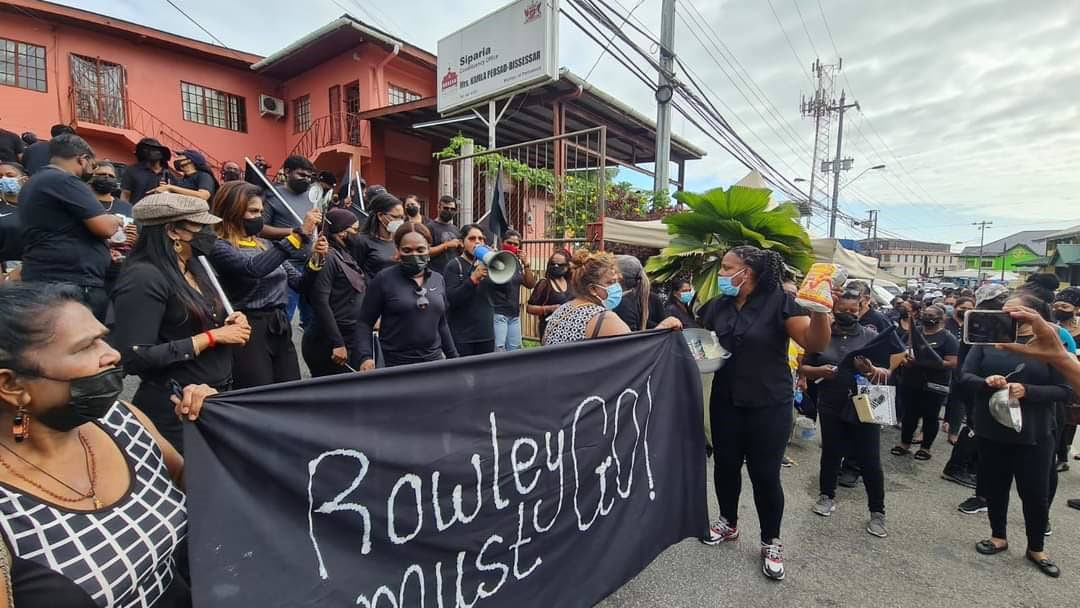 SLAMming empty pots and pans with spoons, while chanting “Rowley must go,” the women’s arm of the United National Congress (UNC) staged a noisy protest outside the Penalty Market on Saturday morning.

Hundreds of women dressed in black raised their voices in unison as they protested against rising food prices, crime and what they called the collapse of democracy under the Prime Minister, Dr. Keith Rowley, whom they described as a dictator.

Pushing empty carts to indicate their inability to buy food, a woman on a loudspeaker bellowed “rice”, to which the crowd replied “we can’t afford it”.

She said a definite no to an increase in the price of gas at the pump as global prices soar amid Russia’s invasion of Ukraine. She said that because “Rowley sold Petrotrin”, the people of “this oil-producing nation were suffering”.

“Rowley is a disgrace to TT. Rowley needs to go.

The call was echoed by UNC Deputy Chief Jearlean John, who told the protesters they had the power to make a difference and they must use that power to shut down the country.

She noted that prices were rising while wages were falling or being eliminated altogether.

“If we don’t have money, we can’t give love. No woman No Cry. No money, no love for Rowley.

She called on the women to “make the men of the PNM cry”.

MP for Pointe-à-Pierre, David Lee, congratulated the women of the UNC for their show of force and appealed to vote against the PNM when the election bell rings. The last general elections were held in 2020.

Oropouche West MP Dave Tancoo hailed the men who came out to support the women, as did Naparima MP Rodney Charles. Charles noted that for a Saturday morning the market was relatively devoid of customers as they could not afford the price of food.

“We go to the market, but we cannot buy. The money is running out. Men have failed women in this country. Rowley has to go. We can’t take it anymore. Too much suffering,” Charles said.

Noting Rowley’s trip to Barbados for the weekend, Chaguanas East MP Vandana Mohit said he would have traveled there to get lessons from Barbadian Prime Minister Mia Mottley on how to govern.

“Let him stay there. We don’t want him back. We are protesting because we are losing food cards because of this government. We protest for the blind and disabled who cannot afford to repair their homes and go to the media for help. We defend the protection of women. How long the pepper spray arrives and cannot reach us.

“We are holding on. We stand in solidarity with the women of our country.

One woman, who identified herself as from Lopinot/Bon Air, called on women to rise up and start boycotting certain products.

“We have to close this place. We can’t let Imbert raise gas prices again. Gasoline goes up, taxi fares go up, and the salary doesn’t go up. It’s time to boycott.