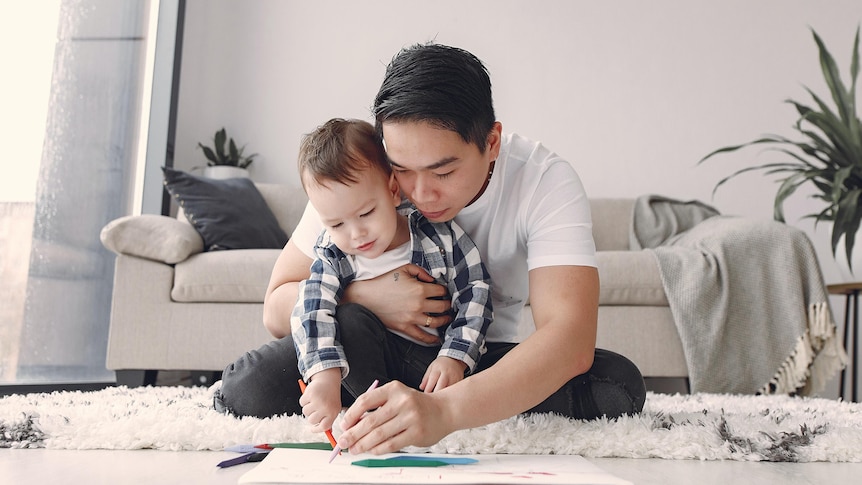 Men want sex, but women want children. It might sound a bit retro-hetero-normative, but it’s been considered axiomatic for millennia.

Data from the Australia Talks National Survey 2021 take these notions and toss them in the trash can of history with hats, gloves and pipe tobacco.

The statement made to survey respondents was whether â€œhaving children is necessary to thrive in lifeâ€ – respondents were asked to agree or disagree.

How do your opinions compare?

We asked 60,000 Australians about their lives. See where you stand on the issues that matter.

Seventy-four percent of the women disagreed with this statement – three-quarters.

Forty-eight percent of the men disagreed, half.

It’s quite a gap.

I read this as suggesting that more men are now seeing the role that children can play in having fulfilling lives.

This is not what many of a previous generation were told. And that’s not what I felt myself.

As a young man in my twenties, I had no interest in having children.

I had all the selfish reasons: I wanna do whatever I wanna do, I have my own thing going on, the last thing I wanna be is a parent, I’m way cooler than that.

But I would also feel – if I had a more thoughtful and deeper moment – nothing at all.

And I was intrigued by it; there was no deeper training there.

And what compounded my bewilderment was that other men weren’t like me.

I was always struck by it, because I didn’t have it.

And it wasn’t that I was against having children, I was indifferent. Neutral.

Ask me the question of fulfillment at 30 and I would have answered with women: no, it is not necessary.

I have the practical outlet of a daily radio show to dig a little deeper into these questions.

When I asked it to the listeners, a text immediately arrived suggesting that perhaps the result of this investigation meant that the men had misread the question. A theme quickly appeared.

Margot said that if you ask a woman this question, she immediately becomes more aware of the reality of childbirth and child rearing.

She knows the pain and potential danger of childbirth, she sees more clearly the grinding of diapers and the mashed vegetables.

Men see the pink glow of fatherhood, the tousled hair of a youngster, daddy’s jokes, the frisbee throw, the pride of having a family.

Do Australians think having children is fulfilling?

Do you need children to have a fulfilling life? The Australia Talks National Survey reveals that most Australians don’t think so.

Kate added that while she knows all about stereotypes, it is still true that most women will struggle with a day’s chore of looking after children which can put a damper on full blossoming. while dad comes home from the workplace the kids washed in their jams jim happy for the diversion of his presence so he can bask in their worship.

Several calls told us that they thought the young men they knew were keen on making a start in family life.

“I am 26 years old, and in my group of friends, everyone who has been in a relationship for more than two years, this is the guy who wants to get married and start having children and this is the woman who wants wait, “one person wrote.

This text questioned whether the trend reflects an innate attitude among men that life is about finding a job, getting married and raising a family.

Brett agreed, saying he had always wanted to have kids and when he was in boarding school his peers all saw nothing else except that they were going to get married and have kids – that’s what life was going to be. to be.

What is Australia Talks?

Two years ago, the ABC asked tens of thousands of people to share their thoughts, feelings and experiences. The Australia Talks National Survey is back – here’s what we found.

There are also cultural expectations.

Edgar, who grew up in a suburban Latvian community, said that you are still highly anticipated to grow up, work hard and raise a family. It was considered a failure if you didn’t.

Trish said that as a young woman she absorbed feminist views and never wanted to be defined by whether or not she had children.

She wanted to make choices about how she lived her life and sought to thrive.

It wasn’t that she didn’t want to have children or see herself as a mother, but it wasn’t the only path to fulfillment.

Many responses reflect this – callers said they would answer this question as feminists.

Men, they suggested, were still back with old-fashioned views of gender roles and family structures.

A text correspondent wrote: â€œI am a 30 year old gay male. I have wanted children for as long as I can remember.

â€œI help friends with their kids all the time and the only time I feel fulfilled is when I can hang out with them and truly be their guardian.

“I firmly believe that we have an innate part in many of us that need to raise children.”

The opposite of that view would be Luke, who said, “I never wanted to have kids. I thought that was something the guys got tricked into.”

There was also a lot of criticism of the issue itself.

How do we define fulfillment, how do we know what someone really said when they said yes or no, and maybe I was taking a long bow to suggest that this question indicated a strong desire on the part? many men to have children.

Of course, there are as many nuanced reactions to this statement and the notions of fulfillment as there are people reading the statement.

My state of mind reflects who I am; I am not someone who projects a lot into the future.

I had two kids and loved it – they’re now in their 20s and I realize I don’t feel like I have grandchildren either.

Perhaps the truth is revealed by the comment from Lyn’s four-year-old son.

He said he wants to be a dad when he grows up because it feels like less work.

The Australia Talks National Survey asked 60,000 Australians about their lives and what keeps them awake at night. Use our interactive tool to see the results and compare your answers.

Then, tune in at 8:00 p.m. on Monday, June 21 to watch hosts Annabel Crabb and Nazeem Hussain walk you through the key findings and explore the survey with some of Australia’s most beloved celebrities.