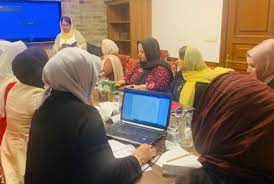 Kabul, Afghanistan – At a rally in Istanbul, Turkey, a number of human rights activists called on the international community to pay attention to women’s rights, especially girls’ access to education, in Afghanistan.

The remarks come at a time when Afghan women, including girls’ education, continue to suffer under the Islamic emirate’s leadership since taking power last August.

“How long is the problem of Afghan women going to continue like this? interviewed Asifa Saba, a human rights defender who attended the event, TOLOnews quoted.

However, some participants believe that such gatherings will have no practical results unless women activists fighting for their rights inside Afghanistan attend these meetings.

“The rally, which took place in Ankara, will not bring any results and I’m sure it was just at the level of a meeting,” said Zholia Parsa, a women’s rights advocate. “The situation of Afghan women has received no attention.”

But the Islamic emirate said its leaders had guaranteed women’s rights across the country, adding that they were part of government bodies, actively participating in various roles.

“Women fill many government positions where they are needed and they continue their work,” said spokesman for the Islamic emirate Zabiullah Mujahid. “Some of them who don’t have jobs, their salaries are paid at home.”

The report summarizes UNAMA’s findings regarding the protection of civilians, extrajudicial killings, torture and ill-treatment, arbitrary arrests and detentions, the rights of women and girls in Afghanistan, fundamental freedoms and the situation in the places of detention.

While the Taliban leaders have taken some measures ostensibly aimed at protecting and promoting human rights, including amnesties for former government officials and members of the security forces, they bear responsibility for a wide range of human rights violations, according to the findings.

“It is high time for all Afghans to be able to live in peace and rebuild their lives after 20 years of armed conflict,” said Marcus Potzel, Acting Special Representative of the Secretary-General for Afghanistan. “Our monitoring reveals that despite the improvement in the security situation since August 15, the Afghan people, especially women and girls, are deprived of the full exercise of their fundamental rights.

The erosion of women’s rights has been one of the most notable aspects of the de facto administration, where women and girls have been particularly prevented from accessing education and leading normal public lives in the country.

“The education and participation of women and girls in public life are fundamental to any modern society. The relegation of women and girls to the home denies Afghanistan the benefit of the important contributions it has to offer. Education for all is not just a basic human right, it is key to a nation’s progress and development,” the UN envoy said.

But Islamic Emirate spokesman Zabiullah Mujahid, defying UNAMA’s latest findings, said the report was “inaccurate” and said there were no extrajudicial killings because TOLOnews reported. If anyone commits such an action, they will be punished on the basis of Sharia, calling the report “propaganda”.

Najib down but not quite in Malaysia