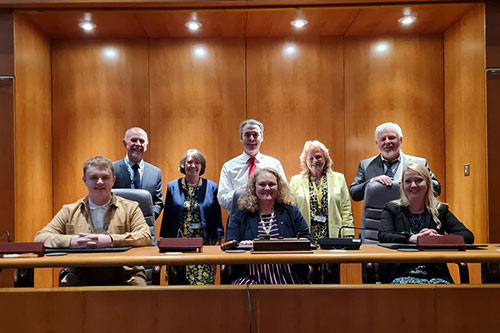 The Midlothian Council leadership has an all-female cast in what has been described as a ‘rare situation’ following an SNP victory at the polls.

And Councilor McCall pointed out that with a female chief executive already in place in Dr Grace McVickers, the local authority was bucking the trend.

The new Provost congratulated Councilor Parry on her appointment saying: ‘We have a very rare situation in Midlothian where the Provost, Chief and Chief Executive are all women and our Cabinet is gender balanced.’

The virtual meeting saw some confusion for the viewing public as councilors agreed to approve amendments naming the new appointments which had not been published.

After weeks of post-election talks, the three parties represented on the council appeared to have agreed on motions that “coordinated” into a joint accord.

However, the board’s senior legal counsel had to remind members to make the decision public.

As discussions about the amendments took place, Alan Turpie said:

“I appreciate that all members were spotted on the various proposals from all three bands, but this is a public meeting and members of the public likely weren’t spotted, so it’s worth summarizing very briefly who will take the deputy provost, the role of the deputy chief and, I suppose, the effect of the proposals on the committees.

The newly elected council is made up of eight SNP councillors, seven Labor councilors and three Conservative councillors.

Councilor Parry thanked the other parties for working ‘collegiately’ with the SNP after the election.

She said: “It’s been really good to have that dialogue and I’m sure over the next few years we’re going to continue with that.”

Former council leader and Labor leader Derek Milligan described cross-party talks since the election as “refreshing” and vowed to continue working together.

He said: “I think with the challenges in front of this council, as the fastest growing in Scotland, it’s going to take a lot and we’re committed to that, that’s why I tried to stop d to use that word ‘opposition’ or leader of the opposition rather leader of the second largest party to argue that we are not here to oppose, we are here to work together.

“Hopefully we’ll see a lot more cross-party work to get the best for our constituents.”

Midlothian View support from just £1. It just takes a minute. Thank you.

Voting tips ahead of the Montana primary election